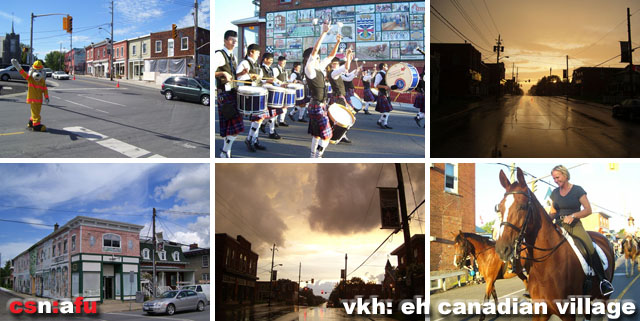 Vankleek Hill is a village of roughly 1800 eccentric and interesting people, roughly one hour’s drive from Montreal, Cornwall and Ottawa… so that pretty much makes us the centre of the largest concentration of Canadians anywhere in the world, which is perfect because we throw a lot of annual festivals, so they all have something to do.

The first business in Vankleek Hill was an Inn run by Cecilia Jaycox, the wife of Simeon VanKleeck himself, and to this day Vankleek Hill is mostly about liquor, food and beds.

Cecilia and Simeon were Dutch ‘United Empire Loyalists’ who sided with the British during the American Revolutionary War in 1776… which didn’t turn out that great for the British, so Simeon left New York with his wife and son, and moved north. By 1797 Simeon, Cecilia and Simeon jr. had started a homestead on the land which inevitably became Vankleek Hill.

Cecilia’s Inn served people travelling up and down the Ottawa and St. Lawrence Rivers, or by land between Montreal and Ottawa. As a result Vankleek Hill has always been a crossroads village, and quickly became the agricultural and trades centre for the region.

The Vankleek Hill region has been my home for almost half of my life — I spent the other half living in Montreal, Ottawa, Toronto, Guelph and Stratford. My first job as a reporter was in Vankleek Hill with the local weekly broadsheet, The Review.

Not too long ago a friend left his car on a side street here while he went camping for two nights… he forgot to lock the doors and left the drivers-side window down. When he got back his car was still in the same spot, all of his CDs were still there, but it had rained so someone had rolled his window up. Welcome to Vankleek Hill.