Opium For The Masses 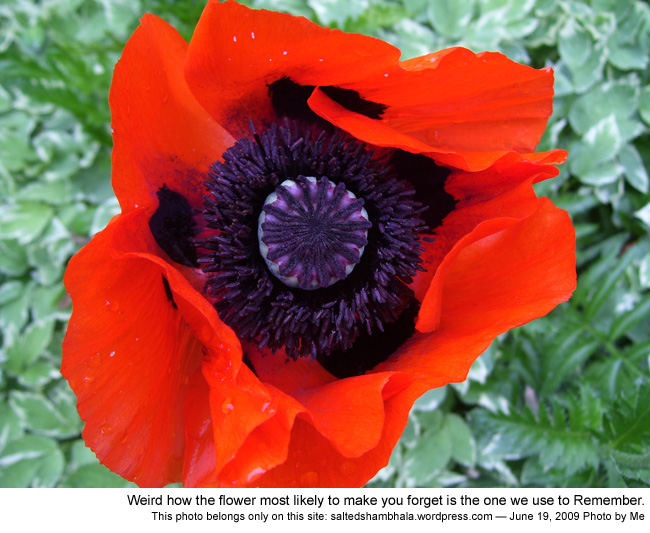 We can’t grow coca in our gardens, and we can’t grow weed, but my grandmother just tossed a thousand poppy seeds into the garden at her assisted living facility which, as far as I know, makes her the newest Afghan warlord. While not all poppies are designed alike, all do have some level of opium. In fact your average store bought poppy plant will generate enough to give you a serious buzz… if you bought ten of them, harvested the dry seeds and used them to make tea.

Technical Stuff: This poppy plant, along with fifteen others, lives in my mother’s garden. Of all the plants this one retained it’s colours longest. I used my little Kodak C533 pocket digital with all the settings on portrait-default. I’m not sure why but the light metre kept screwing up, I think it was taking the reading off the glare of the green plants — sunny day, and the poppy stem was roughly three feet above the green stuff. Of the four sets of three shots (multiple exposure) I took, only one set came out with the colours looking their most natural. With the incorrect exposure settings the poppy came out orange…

One of my neighbours in an Ottawa rooming house back in 1991 was an opium addict. Not one of the prettier addictions. He started smoking it back in the early 1980’s when he travelled to Afghanistan. If I had known my grandmother was going to get into the production side I’d have asked him more questions about the distribution end. The song is Led Zeppelin’s “Kashmir” from their 1976 classic, ‘Physical Graffiti’.

I’ve lived in more than fifty places. I've been paid to pick stones out of fields, take backstage photos of Britney Spears, and report on Internet privacy issues. My photos have been published in several newspapers, and a couple of magazines.
View all posts by Gabriel →
This entry was posted in Nature, Photography, Seasonal, Vankleek Hill Photos. Bookmark the permalink.

5 Responses to Opium For The Masses