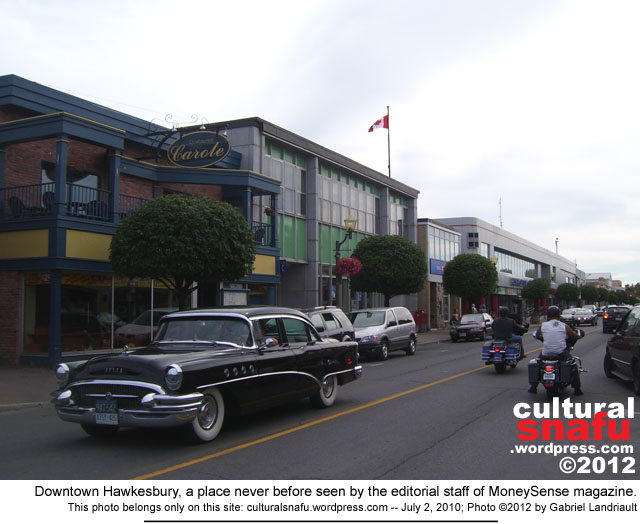 For a few years MoneySense, a Toronto-based magazine, has been ranking cities in Canada from best to worst. For the third year in a row they’ve decided Hawkesbury is one of the worst places to live in Canada, and the absolute worst city for household income.

The rankings published in the Toronto-based MoneySense magazine are based on a points system in categories like employment rates, crime, transit, population growth, weather, air quality, culture, recreation and sports, housing, income, and health professionals — such as dentists and doctors. Then each city is ranked and an anonymous junior member of the editorial team, having never actually stepped foot in your city, gets to write 600 words on how your city is an incredible suckhole.

MoneySense is basically a ‘lists’ magazine. The Rogers-owned magazine comes out six times a year, and to increase circulation and advertising revenue it publishes lists. Like the ‘Top 100 Dividend stocks to retire on’, or the ‘Top 500 US All-Star stocks’, or the ‘Top 200 Canadian Stocks of 2011’, or ‘Canada’s best credit cards’.

List features like ‘the best / worst city in Canada’ take very little effort to compile, no matter what the criteria, but they attract the most advertising dollars.

In Hawkesbury’s case, the MoneySense editorial board has decided the city’s numerous problems can be reduced to:

“Hawkesbury’s tree-lined Main Street is quaint [but] the town lacks basic attractions like a movie theatre*.”
’11 Worst Places To Live’; A helpful suggestion from MoneySense Magazine

Overall, MoneySense ranked Hawkesbury at 150 out of 190 cities. Hawkesbury was close to the bottom in “low crime”, affordable housing and “culture”. The city ranked 23rd in “walk/bike to work”, Hawkesbury has an incredible number of doctors per capita, and the city ranked 55th in “weather”.

What the magazine doesn’t tell its readers is that, for decades, Hawkesbury has been abandoned by both the federal and provincial governments. Or that Hawkesbury sits in the middle of the most economically depressed region in Canada, ranking highest in illiteracy rates, depression, addiction rates and crimes of abuse.

Or that Hawkesbury, once a thriving mill town, is still recovering from losing the thousand good-paying jobs the paper mill provided when it closed down in the early-80’s. Or from the hundreds of manufacturing jobs lost over the past decade, taking millions of dollars more out of the small city’s already devastated economy.

Hawkesbury was founded in 1859, and quickly became the regional centre for the pulp and paper industry. It sits on the Ontario side of the Ottawa River, roughly halfway between Ottawa and Montreal. Eighty-five percent of the city’s current population of 10,550 speak French as their first language, making it the largest concentration of Francophone’s in North America outside Quebec.

Nine generations of Hawkesbury’s people worked in the paper mill, most of them either getting hired before high school, or right out of grade nine.

When the mill closed in the early-80’s there were hundreds of families in a city of less than 9,000 people who had done nothing else for 200 years. And then there was nothing for them.

If MoneySense, or anyone else, needs an example of what Hawkesbury would eventually end up like after the mill closure, take a look at Detroit when the car manufacturer left. It’s called institutionalized poverty. And it brings with it crime, addiction and paralysis.

To blame the people who live in Hawkesbury for the city’s current household income level is like blaming people for drowning when all the boats were swept away as soon as the levies broke.

Yes, Hawkesbury’s problems are mostly self-inflicted, but in the same way that a town recovering from a tornado has no timber or hammers to rebuild — they have to make do with the broken scraps that are left. Without outside help, without charity from surrounding cities, without government support, there’s no option but to fail in the rebuild over and over again.

Hawkesbury is an ugly, scarred little city with very little hope or prospects left. The best thing you can say about the place is, after all this time, there are still people living there who care enough to try and rebuild.

There have been attempts, big and small, over the past twenty years to make Hawkesbury a better place to live, and to visit — they have festivals now, they have street fairs. But it can’t be a surprise when some ideas end up in failure.

Ten years ago (or so) they had the chance to build a commercial and tourism destination along its Ottawa River waterfront, instead they handed the prime real estate, just seconds from downtown, to a developer, who then promptly built six ugly grey homes with an ugly privacy fence.

Instead of a walking and biking trail along the river, linking West Hawkesbury to downtown, and having a waterfront shopping and recreation district with open air food markets and a park extending from the McGill and Main Street intersection to the bridge, there’s nothing of value left along the river.

Downtown Hawkesbury is now completely isolated from the Ottawa River.

Then there was the decision to build a bypass around Hawkesbury’s downtown. Because Main Street turned into a two hour parking lot every weekend, a bypass was desperately needed. And built. But now most traffic never sees the trees and restaurants and businesses of downtown, except from the back.

Or put up new paint. Even if people know what business is in which building, just getting into the parking lots from the bypass is difficult. Some lots are blocked off entirely from the bypass, which doesn’t really matter, because there are no directions. No arrows, no signs saying “Pharmacy Parking here”.

See, we know what the problems are. We know what mistakes have been made, and we know they’ll be made again. Because for the past thirty years the people of Hawkesbury have been trying to rebuild their town using broken boards and bent nails.

And they deserve more respect than being told “you’re the worst” and then being given suggestions on how to improve by someone who, ten minutes ago, never heard of Hawkesbury, and really has no interest in the city beyond telling people what a failure the city is fills some space in their magazine.

In a magnificently tone deaf press release, Sarah Efron, the managing editor of MoneySense, blamed the decision to rank Hawkesbury as one of the least livable cities in Canada on Hawkesbury’s “negative population growth” and its “household income” — which, for more reasons than I just covered, remains the lowest in the country.

Well, with respect Sarah, what you and your magazine have done with this list is tell someone dying from asbestos poisoning that they look like shit, and maybe they should eat something.

Maybe, in next year’s best / worst list feature, your magazine can take a more serious look at the problems in Hawkesbury, and maybe bring those problems to the attention of people who can help.

Because, really, who gives a shit that Ottawa is the most livable city in Canada. Maybe, I don’t know, it’s the “bottom eleven” who deserve the most time, space, effort and attention in your publication.

*There actually is a two-screen movie theatre barely a two minute drive from downtown Hawkesbury. $20 will get you two tickets to a new feature film, two regular bags of popcorn and two regular drinks. Surely having such a value so close to downtown should bump Hawkesbury up a few places.

I’ve lived in more than fifty places. I've been paid to pick stones out of fields, take backstage photos of Britney Spears, and report on Internet privacy issues. My photos have been published in several newspapers, and a couple of magazines.
View all posts by Gabriel →
This entry was posted in Canada, Champlain Township, Eastern Ontario, Hawkesbury, Journalism, News, Politics, poverty, Vankleek Hill, Writing and tagged MoneySense Magazine, Sarah Efron. Bookmark the permalink.