The 2011 Liberal Party election results might count as ethnic cleansing 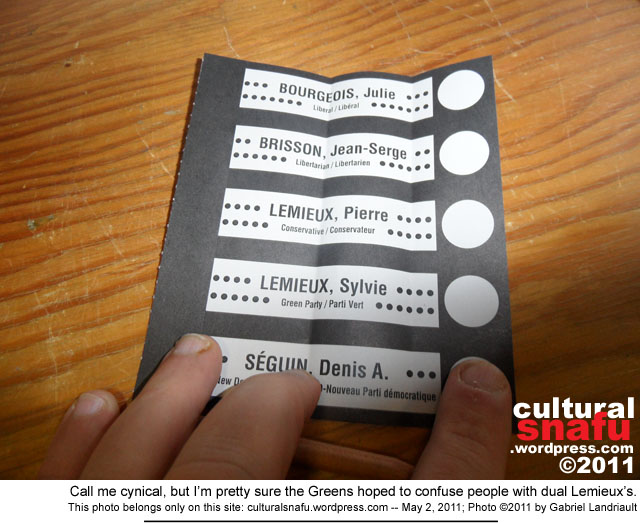 So… that was interesting.

I am blown away at the collective humph to the nuts Canada has given to the Liberal Party of Canada. Seriously, it’s about time. The past fourteen years have been like being trapped in a room with fans of the Montreal Canadiens, listening to them talk about Les Glorieux but oblivious to the fact their team sucks.

You just want to scream “it was Patrick Roy who won you two Stanley Cups entirely on his own, you stupid fuckers… and the reason the LPC won any elections in the 90’s was an undisciplined and uncoordinated Right, not because of Paul Martin and certainly not because of Stephane fucking Dion.”.

Surely someone on the team must have understood that once you got rid of Patrick, it was over.

But of course, the Liberals refused to believe their team could miss the playoffs, because their near-fanatical belief their team is the Natural Ruling Party, so how can they possibly lose? Or even consider the possibility?

The reason the Liberal Party of Canada lost so badly this year is simple — it’s because the best leader they could offer Canadians was Michael Ignatieff, whose only credentials were he was further right than Stephane Dion, with much better speaking skills, and his background suggested he was Stephen Harper’s intellectual equal.

But, really, how the fuck do you win the Stanley Cup with Ignatieff as your captain? The man cannot play defence, the Conservative attack ads proved that, and his only offence during the playoffs was to rip off Bruce Springsteen’s song about recovering from the 9-11 attacks. Rise up, rise up, indeed.

I think voters just got tired of being spoken to like we can’t be trusted with the scissors. The Liberal Party of Canada, we’ve been told so often, is the only party we can trust with the democratic principles they themselves gave onto us some 2000 years ago.

The problem I’ve had with the LPC isn’t entirely with their complete lack of achievement during the Chretien years — it’s the level of arrogance they maintained while achieving so little (except for the Clarity Act, which was awesome).

There’s a deep pool of corruption and ineptness they want us to ignore while they go on about their “legacy of democratic institutions”. Basically, the LPC has been wearing Patrick Roy’s sweater for at least fourteen years, but playing like they were Claude Lemieux.

And then they throw Stephane Dion at us, as if we’d believe he could be a Prime Minister. That was arrogance. We must vote for him to be Prime Minister because… oh, because he’s a Liberal. Okay. Can I have the scissors? Of course not.

But, it’s all over now. The Liberal Party might make a comeback, maybe ten or twenty years from now. And if John Manley, or the head of John Manley on the body of a robot, is in charge, I might even vote for them. That is, of course, if we’re still allowed to vote, what with the Liberal Party being out of power for so long, and Canadian democracy being so fragile.

The best gauge on whether or not the LPC “gets it” will be what they do with Justin Trudeau.

I’ve lived in more than fifty places. I've been paid to pick stones out of fields, take backstage photos of Britney Spears, and report on Internet privacy issues. My photos have been published in several newspapers, and a couple of magazines.
View all posts by Gabriel →
This entry was posted in Canada, Canadian Politics, Conservative Party of Canada, Eastern Ontario, Liberal Party of Canada, NDP of Canada, Politics, Quebec Politics, Vankleek Hill, Writing. Bookmark the permalink.