Pregnancy Update: What happens when her water breaks far too soon 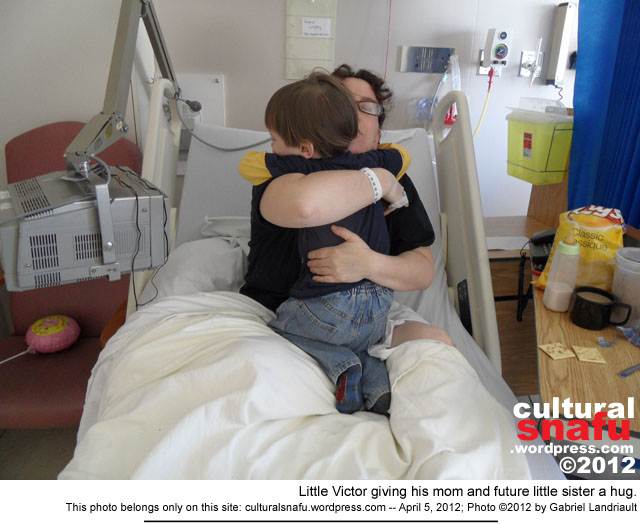 Diane’s water broke, so she has been in the hospital since Tuesday, and won’t be released until the baby is born.

The problem is she’s only 22-weeks into the pregnancy, which is far too early for a safe delivery. At this point the doctors are pumping her full of fluids and medications and steroids, trying to accelerate the baby’s development. Basically we’re just trying to get to the 24-week mark. Anything after that will be a gift.

We knew going into the pregnancy that there might be problems. Diane has a history of high risk pregnancies. She has what’s badly termed an “incompetent cervix”. Before Andrew was born six years ago Diane had two pregnancies that ended tragically. With Andrew and Victor she had a medical procedure done called a “cerclage”, which is a surgical stitch through her cervix.

It’s painful, but it kept both boys inside, safe and sound for the entire pregnancy — Victor was born six weeks prematurely.

So, on Monday morning, Diane called me to tell me there was some “leaking”, and that her father would be taking her to the Ottawa General to get checked. They sent her home, after telling her everything was fine. Then early Tuesday morning the leaking got much, much worse, so her father took her back to the hospital. They admitted her right away, and she’s been there since.

There is still amniotic fluid in the womb, just not a lot, but the baby is still drinking and her belly is full. Which, the doctors say, is important. The baby’s heart rate had been down for a couple of days but, as of today (Thursday) it was back where it’s supposed to be.

Diane’s movement is limited. The nurse wouldn’t let her even take a shower until Wednesday night. She’s only allowed in the wheelchair to get to her ultrasound appointments. The rest of her day is spent in bed.

She’s actually fairly relaxed. Victor and I were there today, and we’ve been talking a lot on the phone, and — maybe it’s having cable TV — she sounds like… like she’s not as worried as she was over the weekend when she was having discomfort and pain, and definitely more relaxed than she was when the water was breaking.

She was very excited to see Victor, unfortunately he was in an exploratory mood. After hugging his mom, Victor decided what he really wanted to do was visit with the new mom in the next bed. Then there was an entire maternity ward full of mothers to visit. So I spent most of our time there trying to corral him.

As we made our way through the hospital, on our way in, out and to the cafeteria for lunch, Victor waved at everyone from his buggy. He said “hi” to everyone on his level, so anyone in a wheelchair. Which was… inspiring to watch. There were a lot of older people, very depressed or quiet, in their wheelchairs either waiting for rides or just to be taken somewhere, who perked right up and looked about ten-years younger when Victor would wave and say “hi”.

So, for the foreseeable future, Victor and I are on our own. Which is okay, it just means I have to do stuff everyday because I can’t rely on Diane taking over for a few days.

The problem is, this happened so quickly I haven’t had time to prepare. So I’ve been feeding Victor out of cans for the past few days because getting to a real grocery store has been out of the question.

Normally I’d have enough food to last Victor roughly three days, then he’d go stay with Diane for three or four days and I’d have time to reload. But Diane went into the hospital at the end of my three-days of Victor Time.

I’ll be able to reload my shelves properly this Saturday, when Victor will have his first non-family babysitter. I’ve had a few friends offer their services as babysitter and to take me to Ottawa to visit Diane. Which I plan on taking advantage of… my step-father commutes to Ottawa every day, but he leaves Vankleek Hill at 5:30am and doesn’t get back until after 6pm. Which, after a few days, would kill me.

Diane has permission for me to stay overnight in her room, but that means sleeping in one of the most uncomfortable chair-beds known to mankind. Plus, I snore like a broken muffler, so I’m pretty sure anyone else sleeping in that room other than Diane and I would have difficulties, at least.

If everything works out properly I’ll be in Ottawa every other day. I do have some friends in the city who might be receiving a call from me, looking for a couch to surf on. Diane’s father will be bringing Andrew to visit a few times next week as well.

Here at home Victor and I will continue to spend our days reading about angry birds, walking to the park, pushing his buggy to the store, watching “The Cat In The Hat” cartoons (with Martin Short!?) and pointing at stuff, and waiting for his mom and little sister to come home.

On a more ‘me-centred moment’, I’ve been almost entirely deaf since January 25, thanks to an ear and throat infection that went away after a week, but left fluid behind my eardrums. As of Sunday afternoon I finally have most of the hearing back in my right ear, but my left ear is still 90% blocked. But it is popping, which is good.

I finally have an appointment with an ear, nose and throat specialist in May.

I’ve also been prescribed medication for hypertension caused, mostly, by the diabetes. And my blood sugar — thanks to the stress from the hearing loss, and the pregnancy, and the blood pressure, and other things — has been entirely out of control since January. My average is back up into the low twenties.

Which is not good.

And, as long as I’m making a list, my kidney functions are down to 37%. Which is not good at all.

Hopefully I can get it all fixed soon, so Evangeline has a daddy at her graduation from medical school.

I’ve lived in more than fifty places. I've been paid to pick stones out of fields, take backstage photos of Britney Spears, and report on Internet privacy issues. My photos have been published in several newspapers, and a couple of magazines.
View all posts by Gabriel →
This entry was posted in Diabetes, Evangeline's Week In Review, Family, Health, Parenthood, Parenting, Pregnancy, Vankleek Hill, Victor's Week In Review, Writing and tagged fatherhood. Bookmark the permalink.

1 Response to Pregnancy Update: What happens when her water breaks far too soon