The good news is the jaws of a house cat, even a Zombiefied one, are too weak and too small to adequately crush your skull, thereby denying it total access to your brain matter. The bad news is the common house cat doesn’t know that.

Technical Stuff: I turned the camera on. After that it was all a blur.

I was sitting on the porch waiting for something and the cat was circling me and unusually friendly, so I started following her with the camera. I took this shot while she was behind me… every shot I took where she thought I was looking came out like some Hello Kitty cartoon. The shots of her behind me… suddenly she’s looking for a kill-spot. 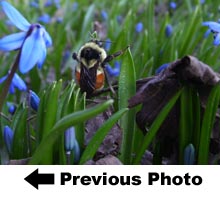 I’ve lived in more than fifty places. I've been paid to pick stones out of fields, take backstage photos of Britney Spears, and report on Internet privacy issues. My photos have been published in several newspapers, and a couple of magazines.
View all posts by Gabriel →
This entry was posted in Photography. Bookmark the permalink.