The End Of Days

It’s not everyday you get to see what the end of the world would look like. Although I always figured there’d be more competitive Irish dancers jigging their way in a colour coordinated, perfectly symmetrical high kicking plaid line into the horizon with smiles permanently fixed in their everlasting tribute to Satan.

Technical Stuff: I was using my pocket digital and set the exposure by aiming the camera straight up to focus. This was taken during “Magic Hour” while an early morning storm was clearing. Magic hour is actually the 30 minutes before sunset and the thirty minutes just after sunrise when there’s almost no glare from the sun, so its light is at its purest.

There are definitely no bunnies in those clouds. It’s not often cloud formations show the hand of God coming down to smite the wicked, but this one comes pretty close to having all the images of the Apocalypse… the crosses stretching into the horizon, the bent and broken light posts in the foreground, the broken landscape of dark old buildings… the Chevy driving towards the abyss. 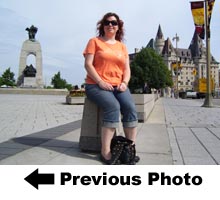 I’ve lived in more than fifty places. I've been paid to pick stones out of fields, take backstage photos of Britney Spears, and report on Internet privacy issues. My photos have been published in several newspapers, and a couple of magazines.
View all posts by Gabriel →
This entry was posted in From My Wall, Photography, Sunrise Project, Vankleek Hill Photos. Bookmark the permalink.

1 Response to The End Of Days