Self Portraits I Can Barely Tolerate 002

The only reason I was able to take this shot was because of the quality of the drugs they had injected into my face. My dentists prescribe to this wondrous new ideal of “no pain clinics”. Which is exactly as simple and perfect as it sounds. Without the injections my hands are curling and pulling the pockets off my pants. With the injections I can think clearly enough to frame this photo perfectly.

Technical Stuff: I set my pocket digital to “multiple exposures”, so basically a series of three shots. The first series came out with just my dentist in the frame with my face. Then the dental assistant decided to help out and took the camera and took a shot, which came out pretty cool but it’s just my giant head and the dentists hands. It looks posed. Then, after looking at my first three shots, I took a second series of three and this was the second shot. The only reason this shot works at all is because of that light attached to her head.

My dentists are exceptionally patient with me. My dentists are also exceptionally hot. Like magazine cover hot. Seriously… like, seriously there is no way your dentist has hair that freaking sexy. The only guy-dentist they have in this clinic has the hands of a twelve-year old. I don’t think I’ve done anything in my lifetime to deserve dentistry like this so I’m totally expecting to be tasered to death while holding tomorrow’s winning lotto ticket. Seriously… check my pockets after it happens, it’ll be there. 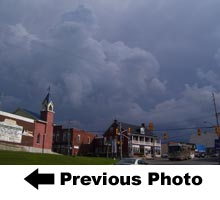 I’ve lived in more than fifty places. I've been paid to pick stones out of fields, take backstage photos of Britney Spears, and report on Internet privacy issues. My photos have been published in several newspapers, and a couple of magazines.
View all posts by Gabriel →
This entry was posted in Favourites, From My Wall, Humor, Humour, Photography, Self Portraits, Vankleek Hill Photos. Bookmark the permalink.

2 Responses to Self Portraits I Can Barely Tolerate 002