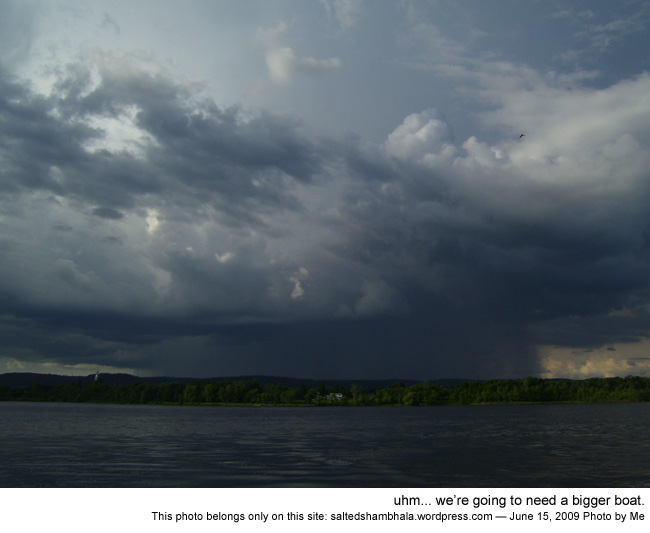 The saying goes “God gave Noah the rainbow for a sign, no more water, but the fire next time”, and that was pretty easy to interpret for most of my life, what with the ability to destroy the world dozens of times over locked into the sweaty hands of two deaf, dumb and blind governments. But unless there’s some spontaneous combustion involved with getting swine flu, I’m not seeing any obvious candidates who can bring down the Jesus fire anytime soon, so I figure we’re good to sin away at our leisure for another few decades at least.

Technical Stuff: My wee Kodak C533 pocket digital, set on landscape and multiple exposures — my hands shake for a number of reasons, so using the multiple exposure setting generally ensures one of the three shots will be in focus. I took four sets, at different exposures. This one was the closest to reality. That’s not dirt on the upper right of your screen, it’s a bird. Or maybe it is dirt… scratch it and find out. No, really get in there. Harder… a little more, just to the right a bit. Oh yeah, right there. Wow… in some countries we’d have to get married now.

I just finished watching John Bonham beat the crap out of his drum set, he was playing his legendary “Moby Dick” drum solo way back in 1970 at the Royal Albert Hall. The rest of Led Zeppelin were there as well. It’s part of a two disk DVD set of nearly six hours of really early Led Zeppelin concert footage I borrowed from my uncle. “Borrowed”… heh. The song is “Moby Dick” and it’s from their 1969 release, ‘Led Zeppelin II’.

I’ve lived in more than fifty places. I've been paid to pick stones out of fields, take backstage photos of Britney Spears, and report on Internet privacy issues. My photos have been published in several newspapers, and a couple of magazines.
View all posts by Gabriel →
This entry was posted in Cool Stuff, Favourites, Nature, Photography, Seasonal. Bookmark the permalink.

3 Responses to It Never Rains