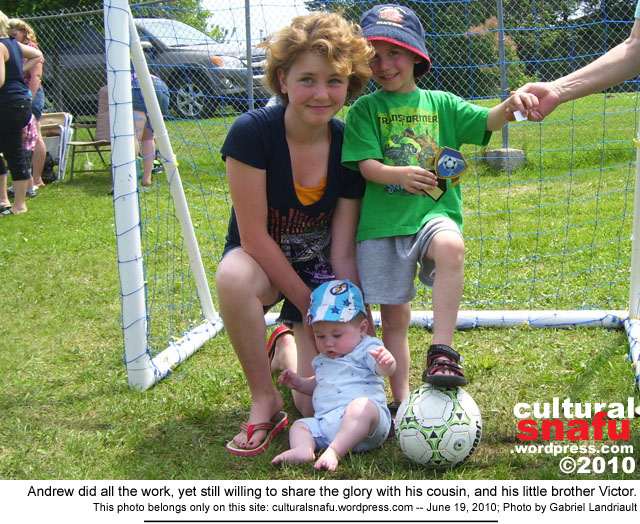 But he’ll only take credit for two of them, and was happier to talk about hugging his friends on the opposing team than his end-to-end rush finishing with his sharp kick of the half-sized soccer ball to the lower corner of the small net. It was a great play, even if the goalie was busy examining something in her hand.

Four-year olds are weird like that. They’re weird in a lot of other ways as well.

Like stopping to hug an opposing player while the rest of the two teams congregates in front of one of the nets, alternating between taking huge empty swings at the ball, and accidentally kicking a player who fell in front of the ball.

Or three-fifths of the team just walking away to find their parents and get something to drink, meanwhile the entire ten members of the opposing team decide to join the game all at once. But not to take advantage of the two members of the opposing team left on the field, it’s just one more random moment in an hour long series of random moments involving a soccer ball.

On Saturday, the outfield of the baseball diamond was divided into three soccer pitches where more than sixty four-to-six-year old boys and girls, and their parents and coaches, came to play in the final games of the 2010 season.

When the season started some of the parents commented on the lack of whistles, or even a referee, but soccer to a four-year old, like Andrew, is just a chance to kick at a ball and get chased, or be the one chasing the kid kicking the ball. As far as I can tell, Andrew having been four-years old for six months now, a four-year old only really knows one game, and that’s “nyahh, nyahh, come get me”.

And this year they just introduced a ball into the game.

Meanwhile, at the 2010 FIFA World Cup, being held in South Africa, the team director for Team France has quit because his team refused to practise after one of the players was kicked off the team for (among other things) insulting the coach.

The behaviour of adult, professional soccer players is almost a parody of the league Andrew just finished playing in. Where Andrew and his little buddies fall down a lot because they’ve only been walking for two years, FIFA players do it over and over again to gain an advantage without effort.

And where FIFA players will, at the faintest brush, flop on the ground as though they’ve been bitten in the groin, Andrew and his little buddies will be back on the field after getting a hug from mom after being hit in the face for the first time ever by a speeding soccer ball.

So, basically, as they get older, and paid, soccer players start to act more like the way we expect four-year olds to act. Except Andrew and the other kids in the Champlain Soccer League never quit… at least not until the heat exhaustion and dehydration kicked in.

Andrew definitely had a great time hanging out with his little buddies.

Next up, T-Ball… and one step closer to hockey.

I’ve lived in more than fifty places. I've been paid to pick stones out of fields, take backstage photos of Britney Spears, and report on Internet privacy issues. My photos have been published in several newspapers, and a couple of magazines.
View all posts by Gabriel →
This entry was posted in Canada, Champlain Township, Entertainment, Vankleek Hill Area Blogs and tagged Champlain Township Soccer League Tournament, FIFA World Cup. Bookmark the permalink.