Victor has been exposed to almost every type of food a baby can eat. And there’s a lot of it… the combinations the people at baby head office have come up with just get weird after a while. Like pork mushed up into three different orange veggies.

I’m still mostly just feeding him his formula, it’s Diane who has been getting creative with Victor’s diet. Basically she has him eating human food, like little bits of beef, asparagus, pork chops and bread. We were out at a restaurant a few nights ago and Diane just mushed up the vegetables on her plate and spooned them into Victor’s ever increasing maw.

Victor also had some mushroom soup that night, and a little piece of his mom’s birthday cake.

He has no teeth yet, so when he gets solid-ish food in his mouth he’ll roll it around on his tongue, then mush it against the top of his mouth.

His teeth are definitely getting ready to make an appearance. His gums are getting swollen where his molars will pop out, and his cheeks get swollen from his gums. He hasn’t been crying recently because of teething pain, so I’m not sure if he’s just getting used to the pain, or maybe this is the calm before the storm.

It’s probably just as well he has no teeth at the moment, because he has just figured out how to get his foot into his mouth. He started trying a couple of weeks ago, but couldn’t do it because the parts of his brain in charge of feet were fighting the parts in charge of getting things into his mouth.

It got hilarious. It was like he could get his foot up to his chest, but then the foot part of his brain realized what was going on and started to fight back — “I’m not going in there… there’s just no way” and wham, his foot would spring back where it belongs.

But the fight is over now. He can’t get it every time, and he’s not really sure what to do with his toes once they’re in his mouth, but he can get it done.

It’s the small evolutions that are most fun to watch. Like the day he discovered his hands, or when he first started to really lock eyes with us, or when he finally got control over moving his head.

This past week we had him in a high chair at the restaurant, and it was set so he could lean back while he ate. After we refilled his bottle I put it just out of his reach, and he managed to bend himself forward at the waist, then he reached way out and pulled the bottle back.

Not too long ago he could only reach with his arms and shoulders, but he couldn’t get his back off the chair.

A few days ago I held him in a standing position in his crib and waited for him to grasp the railing. When he did I let go of him… my hands were still there, just not touching him. He stood on his own for a second, before he collapsed back into my hands.

…I think the Jolly Jumper and ExcerSaucer are turning out to be both a benefit and a curse for Victor. They have really strengthened his legs, and they give him the illusion of standing, but because of the way they’re designed they’ve taught him standing should be quickly followed by falling down.

Victor has been getting into the crawling position faster, and for longer over the past week. I have a one minute long video of Victor in his crib and he gets into his starting position four or five times — picture him doing half push ups. He rocks forwards and back a few times, then lays down on his stomach and gives it another shot.

He really gets a kick out of having something new for his body to do.

Just watching him getting ready to move is now one of my favourite things.

My absolute favourite thing to do with Victor is to sit out on the balcony and watch the sun go down. Another is to give him new things to hold. Last week Diane and I were at the grocery store, and I gave Victor an orange to hold. He twisted it around so he could see the whole thing, then tasted it, decided he liked it, and for the rest of the time we were there he tried to fit the orange into his mouth. 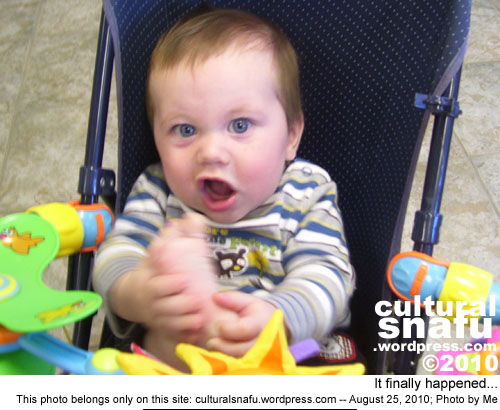 I’ve lived in more than fifty places. I've been paid to pick stones out of fields, take backstage photos of Britney Spears, and report on Internet privacy issues. My photos have been published in several newspapers, and a couple of magazines.
View all posts by Gabriel →
This entry was posted in CSN:AFU Aboot Me, Entertainment, Everyday Stuff, Family, Favourites, Parenthood, Parenting, Photography, Portraits, Vankleek Hill, Vankleek Hill Photos, Victor, Victor's Week In Review and tagged ExcerSaucer, fatherhood, parenting. Bookmark the permalink.

3 Responses to Little Victor Update | Getting ready to crawl