Little Victor Update | The zombie, the Joker and the CAS case worker

Victor will be eleven months old in a few days. People have been asking if he can crawl yet, he can’t… at least not when he’s awake.

I caught him doing push-ups in his sleep last week, he was actually up on his fingertips and toes and rocking back and forth. I’m still pretty knew at this, so I don’t know if this step in his evolution is normal or freakish, but it feels more like the latter.

From a prone position, while fast asleep, he rose up so his legs and arms were fully extended, and his back arched upwards, then kind of wriggled around before laying back down. Then, a few seconds later, he did it again. There are times when I’m pretty sure he’s going to be walking before he crawls.

Actually… Victor can walk now. At least he can make the motions. Until we can find a cane small enough for him he can only do it while one of us holds onto his hands. But, when he concentrates hard enough, he can put one foot in front of the other, and he does seem to really enjoy doing it.

One thing he really enjoys now is feeding himself. I believe this means Diane and I might be coming to the end of our responsibilities as parents. On my list the only things left is for Victor to find a job, and change his own diaper. After that I think all we’re supposed to do is help him move into his own apartment and we’re done.

Victor has been able to hold his own bottle since he was three weeks old. Diane even has a few photos of Victor holding, and using, his own spoon. And now he can find his own mouth when he’s eating his puffed cereal with his hands. It took a while. First we had to help him recognize the puffs as food, but everything after that was all him working stuff out.

For the longest time he would pick a piece off his tray, examine it, wave his arm around, then flick the piece of cereal to see how far he could make it fly. But then he started to teach himself to synchronize his arm, wrist and hand so he could get the puff as close to his mouth as possible.

He would get so happy if he could get a piece to stick to his cheek. Or he would think he got the piece into his mouth, and start to chew, but the piece of puffed rice would remain stuck to his hand.

Watching all of this happen, Diane is becoming more and more convinced Victor is left handed.

Victor also had his first experience with dry leaves lasts week… Diane wanted some photos of Victor playing in the leaves, he really seemed impressed. I don’t think we let him discover enough stuff when we’re outside. When his older brother was playing sports at the arena, sometimes we’d put Victor on the ground — mostly on a blanket on the ground — or, sometimes I’d walk up to a tree and let him grab at branches.

Not so much after sports ended.

When we sat Victor in the pile of leaves we could definitely see how strong he has become, he can sit up all on his own and even use his arms to balance himself.

The good news was, he didn’t try to eat the leaves.

Victor has new teeth, I think he’s up to five now, with a lot more on the way soon. He’s had a few teeth-related fevers recently, and his ears have started to hurt him enough that he spends a lot of time rubbing them.

Victor had his first Halloween experience this week. Diane did a great job turning him into The Joker, then she turned herself into a pretty awesome zombie. We hooked up with some friends to go door-to-door, but the three of us only had time to hit the major houses, all of whom fell to pieces over Victor.

Rosemary Harden even brought (dragged) Diane and Victor into her home to meet with some older (complete strangers to us) relatives. I think it was the closest anyone has come to having a real Hansel and Gretal moment.

We finished off at the convenience store where Diane works. Her boss gave Victor a bunch of chocolate bars. Nice guy. Andrew, Diane’s oldest son, made out like a bandit. He dressed up as “Bumblebee”, from the Transformers. There are boxes of candy in Diane’s apartment right now.

Of course, I continue to remain diabetic. 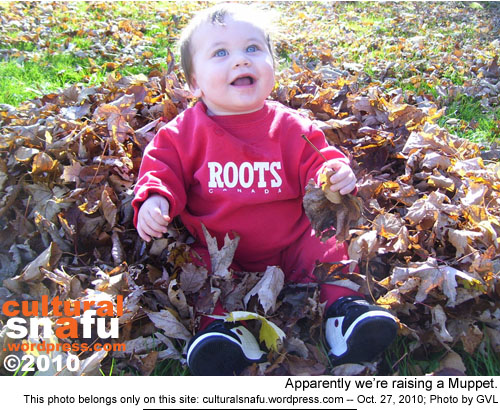 Changing gears slightly… on Thursday, October 14, someone called the Children’s Aid Society — now known locally as Integra — and told them I was an immediate threat to my son’s safety because I was “severely depressed”.

The person also claimed I was being “aggressive” with my son and, bizarrely, I was also supposedly “yelling inappropriately at people”.

Of course none of the claims were true, and seemed to be completely pulled from thin air. But I was investigated anyway, such is the beauty of a system where people are allowed to retain their anonymity behind their lies and delusions.

But a guarantee of anonymity does not always mean the complainant is anonymous. There are times when “anonymous” means someone’s identity is barely hidden due to a lack of direct evidence but, as in this case, all of the substantial circumstantial evidence points to less than a handful of suspects.

The case worker was accommodating, and even apologetic. She asked her questions, and Diane and I gave her answers. She inspected my apartment, she played with Victor, and felt comfortable enough to dismiss the claims against me as “borderline harassment”.

At the moment the answers to my questions point to two possibilities: the complainant either has access to both of my blogs or, more likely, it was someone who knows me in the real world.

There are fewer than twenty people who regularly read or know about both of my blogs and, other than a few members of my extended family, they were all invited by me.

So while only some of the evidence fits an Internet stalker, almost all of it points to a specific member of my family.

Which would fit a long pattern of abuse and vindictiveness on her part.

Almost seven months ago I made the decision not to allow my grandmother to have access to my son. She made several disgusting comments to me regarding Victor, my girlfriend and my mother — comments, it turns out, my parents knew about months before the incident, yet felt it unnecessary to warn me beforehand — and I had enough.

Somehow she has managed to abuse my family for decades with zero consequences to stop her. If she felt she was being persecuted, or finally being held to account for her abuses because of my decision to keep her away from my son, it would make sense for her to lash out like this in an attempt to turn me into the abuser.

Of course, it is possible someone I trusted with access to both of my blogs made the phone call to the CAS… but there are things the complainant told the case worker that are just not available on either blog.

But, it’s over now. So what, I asked the case worker, would stop the complainant from repeatedly calling the CAS… could my girlfriend and I look forward to weekly visits? The case worker said if there was another call from the complainant she would treat it with suspicion, and if there were more the CAS would consider it as harassment.

Good times. I think I stopped being angry on the car ride to the Hawkesbury offices of Integra, where I had to sign some papers — as I was calming down, Diane seemed to be getting more anxious. I knew there was no chance of losing Victor, but not being angry at the case worker who was only doing her job doesn’t mean I’ll ever forgive, or forget, someone tried to have my son taken from me.

I’ve lived in more than fifty places. I've been paid to pick stones out of fields, take backstage photos of Britney Spears, and report on Internet privacy issues. My photos have been published in several newspapers, and a couple of magazines.
View all posts by Gabriel →
This entry was posted in Eastern Ontario, Family, Family Events, Favourites, Hawkesbury, Little Victor, Parenthood, Parenting, Photos, Seasonal, Vankleek Hill, Vankleek Hill Photos, Victor's Week In Review and tagged fatherhood. Bookmark the permalink.

4 Responses to Little Victor Update | The zombie, the Joker and the CAS case worker