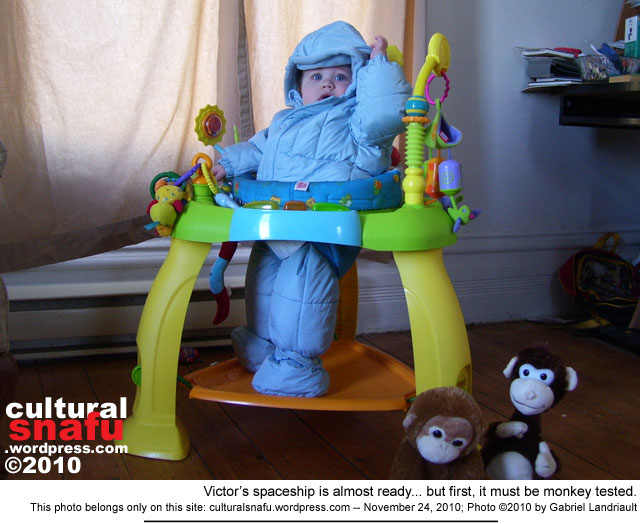 Victor is getting sick. We’re pretty sure it’s a cold, whatever it has been coming on slowly for the past two days.

We’ve spent most of the night trying to coax him to sleep, but whenever we leave he starts with the loud crying. He’s obviously tired, he keeps pushing and twisting his hands into his eyes. Diane held him and hummed to him for half an hour in the dark, and eventually he calmed down. But once she put him down in his crib he started crying again.

And it’s not his barely-tolerable, medium level “I’m hungry and wet” cry. It’s his “I just found out the Universe hates me” cry.

Which is exactly the sound of the opposite of good.

We just had him in the living room for about thirty minutes. There’s no fever, which is good, but his nose is a little stuffed. Diane thinks most of the problem right now is he has a lot of gas, which he can’t pass, and he’s overtired. He did miss his afternoon siesta.

While he was out here we were listening to music, mostly Tom Petty, and I was keeping time by beating on my desk. Victor loves music, and has little dances he does when he gets excited when I’m laying down a beat. I think it’s just the pounding on my desk that gets him going — big smile, swaying side to side.

Then I yell something like “yeah, John Bonham, John Bonham”, and he goes nuts, his little arms waving in the air.

Diane was holding him while he was dancing, and he kept driving his head into her chest. It’s part of his dance. My son is a headbanging maniac, and he’s not even a year old yet.

We finally put him back into his crib and he was quiet for about twenty minutes, then he started his stutter cry. Sometimes he’ll have a little cry while he’s sleeping, kind of like having a bad dream, and he’ll wake himself up and the crying gets a little louder because he realizes he has been crying.

…basically he doesn’t know what’s wrong, just that something must be wrong because he was crying. The good thing about these cries is they never get too loud… because there’s nothing wrong.

But because he was so tired it sounded like he was crying with a stutter. I’ll admit it does get annoying having Victor cry when there’s either nothing wrong, or after we’ve done everything we can to fix the problem as best we can — bottle, diaper, excersaucer, hugs, humming, diaper again, warm the bottle, OraJel, hugs, back scratching, diaper again, warm blanket, Baby Tylenol, isolation, whispering to each other, TV off, praying, diaper again.

…that’s funny, he just woke himself up a little by letting loose with three loud, long bursts of gas. His breathing has been a little wheezy, that’s the main reason we think he’s got a cold coming on, but I think most of his crying tonight was from not knowing how to fart (30%), being tired (50%) and the cold (20%).

Diane wants Victor to have his first haircut. I told her he has to have sideburns. My brother and step-father have no sideburns, and I think it looks freakish… freakish in a Billy Bob Thornton in “Slingblade” kind of way.

I showed Diane some photos and she agreed. Our son keeps his sideburns no matter what. Victor’s hair is getting long, but I want it to fill out a bit more before we start hacking away at it. I suggested we let it grow so Victor can have a Justin Bieber hairdo.

For the past week I’ve been calling Victor “Victor Bieber”… it actually sounds a lot better than Justin. Victor Bieber seems to get a kick out of the new name. But the boy also smiles like a maniac when I’m banging out Tom Petty’s “American Girl” on my desk.

Victor Bieber, Diane and I also had lunch with some blog friends this past weekend. We met Susan, who blogs as KnitNut, and her boyfriend at Shawarma King in Ottawa.

As I’ve said many times, on many blogs, Susan is one of my favourite bloggers, so it was great to see her again.

Shawarma King has always been one of my favourite restaurants, and Diane got hooked on halal meats while she was pregnant. Victor Bieber had his first taste of shawarma. He was very impressed.

Victor Bieber’s first real birthday is coming in two weeks — I think this is when all the monthly birthdays are supposed to stop meaning so much. So far the plan is to have mid-afternoon cake and coffee with some friends and a few pieces of Diane’s family.

My grandfather has no problem calling Diane to invite himself over to visit with Victor Bieber, so he called and came over this week. He and Victor spent an hour together at the kitchen table.

We showed my grandfather — also named Victor — all of our son’s new tricks. My grandfather was thrilled to see Victor crawl, but he laughed hardest when Victor started playing self-fetch with his red car. Victor will crawl towards his car, or his ball, and when he reaches out to grab it, he’ll flick it further away, then laugh and crawl to his car… hence: self-fetch.

At one point they pressed their foreheads together for what had to be a solid minute. There are times when the two of them are together when I think my grandfather could cry.

This was at least one of them. Maybe two. Victor Bieber.

I’ve lived in more than fifty places. I've been paid to pick stones out of fields, take backstage photos of Britney Spears, and report on Internet privacy issues. My photos have been published in several newspapers, and a couple of magazines.
View all posts by Gabriel →
This entry was posted in Family, Friends, Little Victor, Parenthood, Parenting, Photography, Vankleek Hill, Vankleek Hill Photos, Victor, Victor's Week In Review, Writing and tagged fatherhood, parenting. Bookmark the permalink.