You Can’t Handle The Tooth 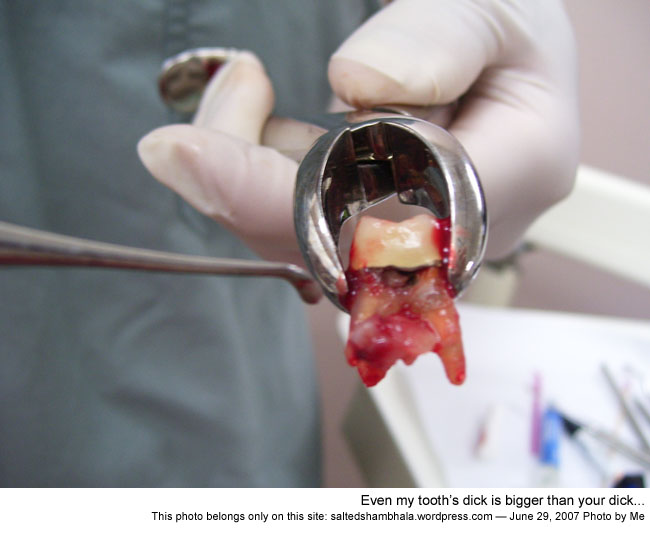 No wonder I wasn’t gaining any weight, all the food I was jamming into my mouth was falling straight into that hole. That crown was seven years old and still going strong when the tooth was finally pulled from my head. That’s serious Canadian craftsmanship right there.

Technical Stuff: I only took one shot because I still wasn’t using my multiple exposure option, and I made sure to have the camera set on “center-zone”… but somehow I missed setting the focus on that ginormous piece of decomposing bone and ceramic. Generally when I take closeups with my camera set on “multi-focus” it focuses on whatever random crap it first sees. But when I’m on “center-focus” I have to look at the screen before I shoot so I can have an idea what’s in the centre… which is almost never a possibility.

The dentist wanted to clean the blood off before I took the shot… fool. That’s not actually a dick poking out from between the four legs of that monster. It’s a giant bag of pus. This is the coolest photo ever.

I’ve lived in more than fifty places. I've been paid to pick stones out of fields, take backstage photos of Britney Spears, and report on Internet privacy issues. My photos have been published in several newspapers, and a couple of magazines.
View all posts by Gabriel →
This entry was posted in Cool Stuff, Favourites, From My Wall, Vankleek Hill Photos. Bookmark the permalink.

10 Responses to You Can’t Handle The Tooth