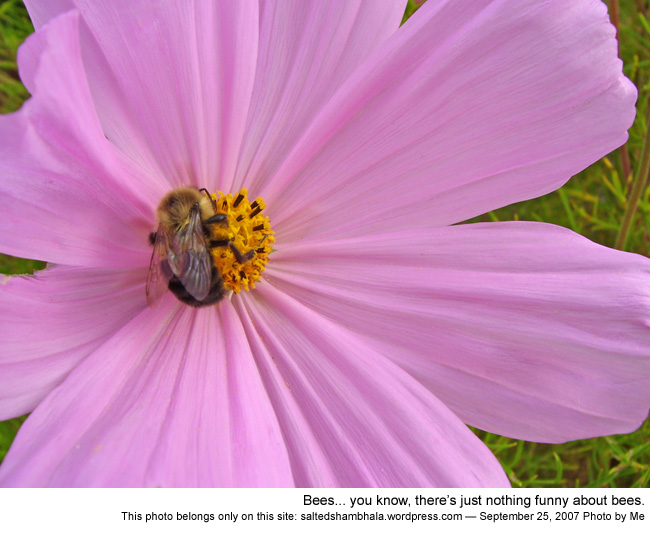 Honey bees are responsible for roughly 80% of the food we eat and yet no one knows why they’re dying off in such huge numbers… before we brought the European honey bee over here it was the mosquito which did most of the pollinating. Of course we’re doing our best to eradicate them as well.

Technical Stuff: I lightened the entire photo by 15% using a photo editor, I think this would be equal to opening one stop during the developing process… if this were a black and white image. I love the way the bee looks like it hit the flower with force and is sinking into it. Those lines on the petals are my favourite part. With a tighter crop it looks like the bee is sinking into silk. I used my pocket-digital Kodak C533 set, I think, on centre-focus.

The honey bee has gone so far into remission there are huge parts of China where hundreds of people pollinate fruit trees by hand… is it just me or in today’s increasingly difficult economic downturn is there suddenly serious potential for job creation? Get North America back to work, kill a bee.

I’ve lived in more than fifty places. I've been paid to pick stones out of fields, take backstage photos of Britney Spears, and report on Internet privacy issues. My photos have been published in several newspapers, and a couple of magazines.
View all posts by Gabriel →
This entry was posted in Animals, Favourites, From My Wall, Nature, Photography, Vankleek Hill Photos. Bookmark the permalink.

2 Responses to Bee Wrapped In Pink