Self Portraits I Can Barely Tolerate 005 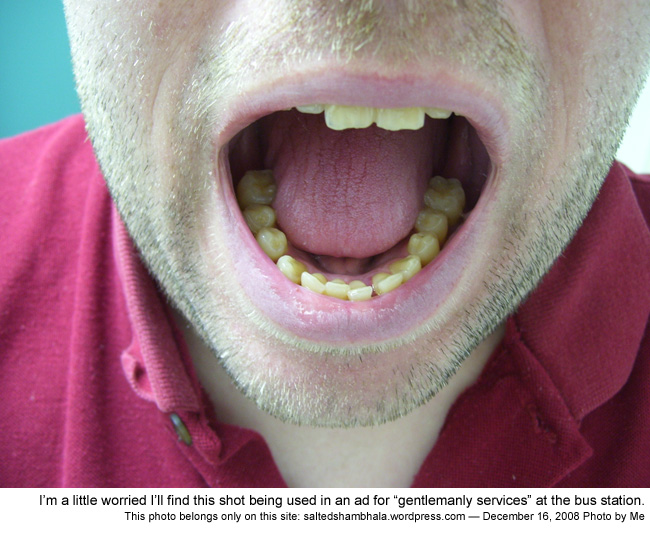 No, I’m not asking for a date. This is me saying goodbye to one of my molars. I was supposed to have one pulled a few minutes from when I took this photo, the general concept was I’d take an after shot with a gaping, bloody hole in my mouth then put them together and… I don’t know, try and make people vomit I guess.

Technical Stuff: It’s the two-tone background that makes this photo cool. I’ve never really liked fluorescent lighting… but I don’t think I’ve taken the time to really shoot with it. Fluorescent light is actually green, standard bulbs are a nice warm yellow. Take a photo at an event where you can’t use flash, and have to rely on the standard high school issue lighting and your colour photos will come out with a sickly green tint. But for some reason, every once in a while, I take a shot using fluorescent lighting and it comes out with a very cool, very stark white look.

So, while I was in the dentist chair waiting for my gums to go numb, I decided I wanted to keep the tooth. It had been infected, and painful, but after a week of antibiotics the inflammation went away and the tooth settled back where it should have been. The dentist — who is spectacularly hot — was a little surprised but was cool with the decision. I had lost three already in 2007/08 and was fed up with the new holes in my face. It’ll have to come out eventually, but not yet… sigh, “that’s what he said”.

I’ve lived in more than fifty places. I've been paid to pick stones out of fields, take backstage photos of Britney Spears, and report on Internet privacy issues. My photos have been published in several newspapers, and a couple of magazines.
View all posts by Gabriel →
This entry was posted in Experiments, Photography, Self Portraits, Vankleek Hill Photos. Bookmark the permalink.

1 Response to Self Portraits I Can Barely Tolerate 005