Burning My Way Into Shambhala 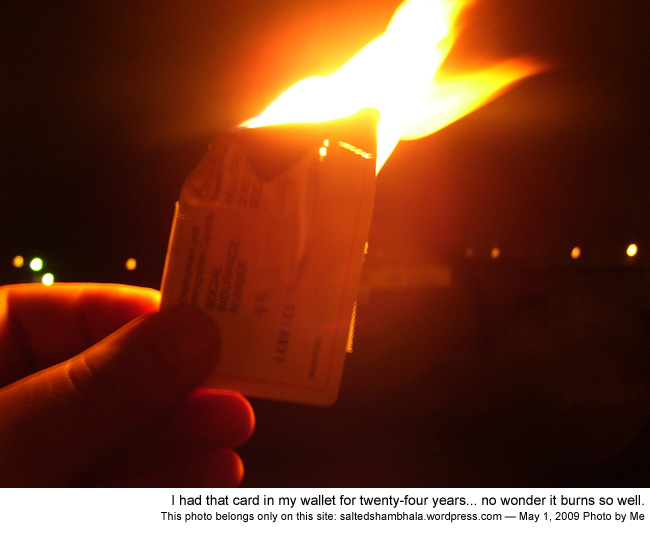 How to dispose of something in a meaningful way, at least in a way relevant to the feelings associated to the object, is a tricky thing. Most of the time you only get one chance to do it right, and if you want to film the event you definitely will never get a second take. For a lot of weird and wacky reasons I recently changed my name, so that’s my Social Insurance Number (SIN) with my old name. My new name, and this is strictly for the purposes of performing fraud so don’t tell anyone, is Sydney Crosby.

Technical Stuff: The card isn’t actually on fire… it is melting, but the fire is coming from surgical gauze tightly taped to its back. I also soaked the gauze in lighter fluid because without it the flame barely burned at all. The camera is set on “portrait” and multiple exposures. I only took three sets of three shots, this is the only one where the flame looks like this… in the others it’s just one large flame. I did edit my name and SIN number out of the shot… I’m not totally insane. No… wait, yes we am.

The song is “Shambala” by Three Dog Night… they spell it without the second “h”, I was going to post their “Joy To The World” but thought it’d be overkill. I figured out how to embed songs without having to upgrade my WordPress account, so even though it’ll mean more work and effort, I’ll be posting songs here whenever I post a photo… but only because Sydney Crosby loves you so damn much.

I’ve lived in more than fifty places. I've been paid to pick stones out of fields, take backstage photos of Britney Spears, and report on Internet privacy issues. My photos have been published in several newspapers, and a couple of magazines.
View all posts by Gabriel →
This entry was posted in Almost Like Art, Cool Stuff, Experiments, From My Wall, Photography, Self Portraits. Bookmark the permalink.

1 Response to Burning My Way Into Shambhala