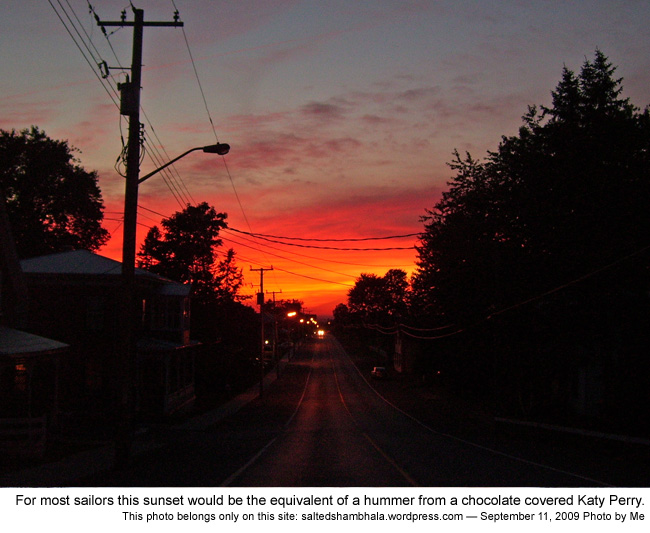 Red sky at night, sailor’s delight, red sky in the morning, sailor’s take warning because she’s probably got an STD. Better listen, because that’s a direct quote from Jesus Christ. Seriously. Jesus Christ of Nazareth is quoted, in the Bible, as having said “when it is evening, ye say, it will be fair weather: for the sky is red. And in the morning, it will be foul weather to day: for the sky is red and louring.” I don’t know what “louring” means, but I assume it’s an STD of some kind.

Technical Stuff: The first thing you have to do to get a photo like this is make sure there’s no traffic. I was standing in the middle of a crosswalk with two blind turns. It’s not exactly dodging gunfire on the Gaza Strip, but every situation has its own unique dangers. I also set the exposure at ‘+1’ which, on a real camera, would mean I closed the aperture a couple of stops (less light). No, digital cameras are not real cameras, and all of us using them to capture our important moments are all going to be fucked when they finally change the default image coding standard away from jpeg — bet you didn’t know saving an image as a jpg/jpeg automatically reduces its quality.

So the sum total of direct quotes attributed to Jesus in the Bible comes out to a couple hundred words. Maybe. The guy lived for thirty-three years, I’m sure he said a lot of things. But the editors pared it all down to a couple hundred words, and thirty-four of them are about the weather. And the translators couldn’t even get the rhyming scheme down. Honestly, I think the poor bastard got crucified twice. The song is “The Storm” by Big Country from their 1983 debut, self-titled album. 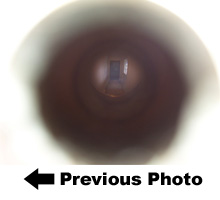 I’ve lived in more than fifty places. I've been paid to pick stones out of fields, take backstage photos of Britney Spears, and report on Internet privacy issues. My photos have been published in several newspapers, and a couple of magazines.
View all posts by Gabriel →
This entry was posted in Everyday Stuff, Nature, Photography, Sunrise Project, Vankleek Hill Photos. Bookmark the permalink.