Photos I Am Not Even Marginally Proud Of Taking 001 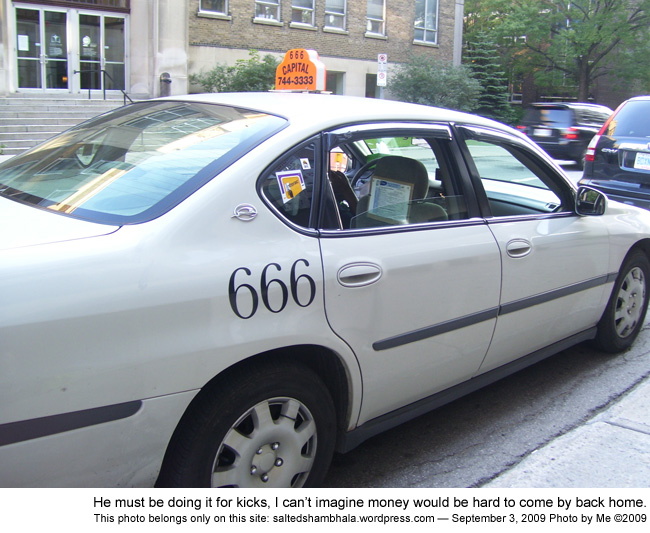 You’d think business would be booming, but in these “tough economic times” I guess even Satan had to take a second job… weird he’d end up driving a cab in Ottawa. Go with what you know, I guess. The song is AC/DC’s “Hell’s Bells”, from their 1980 ultra-classic ‘Back In Black’.

Technical Stuff: I did my best to make sure it was in focus. I did this by half-depressing the trigger, and allowing the computer in my camera enough time to adjust the pixels, as translated through my lens. That’s about it… I guess getting enough of the car in the frame so it could be recognized as a taxi was important. It wouldn’t have made much sense to have just the number 666 and a grey background.

Other than the “evil taxi” angle there’s absolutely nothing about this photo that warrants wasting 180k worth of space on the Internet. In ten years, when the Internet finally reaches its capacity, and the people in charge of purging all the crap from the system to make room for more Jonas Brothers videos find this post, I’ll have no problem when it goes missing. Until then, take a look at how in focus that car is… oh yeah, I own that bitch.

I’ve lived in more than fifty places. I've been paid to pick stones out of fields, take backstage photos of Britney Spears, and report on Internet privacy issues. My photos have been published in several newspapers, and a couple of magazines.
View all posts by Gabriel →
This entry was posted in Cool Stuff, Entertainment, Everyday Stuff, Marginally Half Decent, Photography. Bookmark the permalink.