Once A Year Vankleek Hill Becomes A Hoarders Paradise 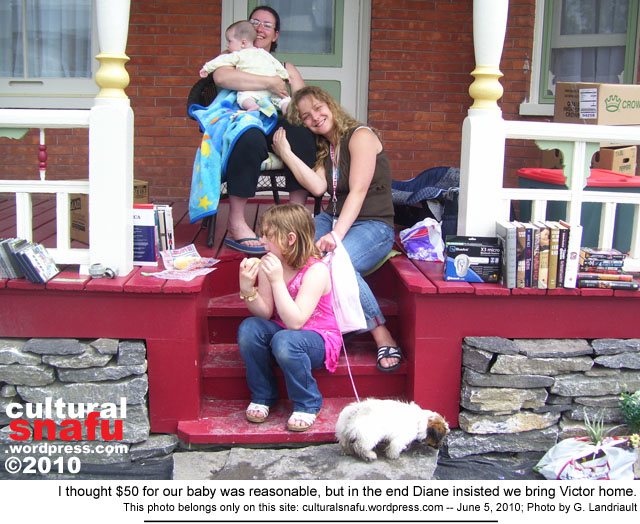 My girlfriend and I, along with some of her friends, and our baby set up shop on my parents porch to sell stuff during Vankleek Hill’s 11th annual “Trash & Treasure Day” on Saturday. Most of the offers we received were for our baby… some of them seemed very reasonable.

I’ve been making an attempt to de-clutter my apartment recently, so this years T&T came at the perfect moment. It’s a town-wide yard sale put on by the Vankleek Hill Business and Merchant Association, and it usually brings in a lot of tourists from the neighbouring towns and villages.

The weather was a little dodgy this year — it rained in the morning, got hot in the early afternoon, then there was a downpour just after the event ended — so attendance appeared to be down, but we didn’t set up until 11am, and I was mostly concentrating on selling off most of my CD collection, three dozen DVD’s, a pile of games for the PS2 and twenty-six books.

I actually did all right, a lot better than I thought I would have. A buck a CD, two bucks each for the DVD’s, five for the games and three for the hardcovers and I came home with less than half the stuff I started out with. And now my apartment is nicely on the way to being de-cluttered, and I can afford to feed my baby for another week.

I was also kind of impressed with the fact I was able to hang out and talk to strangers. This is not something I can usually do comfortably. At least not in recent years. So that was cool.

There were a few people who stopped and wanted to talk about music, which was great. One of them wanted to talk about Blues, which was even better. A kid, who otherwise would never have been able to buy the game in a store, stopped to buy my copy of Grand Theft Auto: San Andreas, and we talked video games for ten minutes. Which was also great.

…I should probably take this moment to apologize to his mother… and, inevitably, to his teachers and his parole officer. I totally apologize. But it was three bucks, and daddy’s got to eat.

During the last sixteen months, because of the high-risk nature of my girlfriend’s pregnancy last year, and now having Victor around, I’ve basically turned into either a hermit or a shut-in. So having an opportunity to hang out on a street corner during a high-traffic event like the T&T, where everyone’s getting deep into everyone else’s business, turned out to be a refreshing change of pace.

The Vankleek Hill-wide yard sale comes roughly three weeks after — after — the town-wide Vankleek Hill spring cleaning trash day, where people empty out their sheds onto the sidewalks for the garbage men to come and take away furniture, TV’s, old computer systems, boxes of crap, and my old mattress and box spring.

As a result, at the end of “Trash & Treasure Day”, the “Trash” part people can’t sell has to be hauled back to the sheds to wait for next years “Big Garbage Day”. And “Big Garbage Day” swallows up a lot of the “Treasure” people could be selling, or inter-village recycling, on T&T Day.

I’m not sure how it could be fixed, but it does seem a little backward, and a lot of stuff that could otherwise be recycled is probably heading off to the dump instead.

The strangest thing I saw sold off during T&T Day was a ten-pin bowling ball named Betty. It belonged, until Saturday, to my girlfriend, and she sold it for two bucks… including the case.

And, looking at him now, sleeping in his little basket, I am glad we didn’t sell Victor.

I’ve lived in more than fifty places. I've been paid to pick stones out of fields, take backstage photos of Britney Spears, and report on Internet privacy issues. My photos have been published in several newspapers, and a couple of magazines.
View all posts by Gabriel →
This entry was posted in CSN:AFU Aboot Me, Entertainment, Humor, Humour, Reporting, Vankleek Hill Area Blogs and tagged Vankleek Hill Trash & Treasure. Bookmark the permalink.