Finding Shambhala On A Mother’s Shoulder

There is nothing so self-unaware, self-unconscious, so blissed out as a (non-teething) baby. They don’t even really exist, physically, to their own senses… I’d imagine the first six months of being a baby would be a lot like living in a sensory-deprivation tank, except in reverse. It takes a baby long seconds to realize the pressure they feel is indeed a pressure, then more time figuring out it’s located around their hand and it’s being applied by something else, something foreign… which means the hand the pressure is being applied to is theirs. And then the baby holds up their hand, accepts it as their own, and laughs like a maniac.

Technical Stuff: The first things you need to get a shot like this is a patient woman willing to have your child. Then just make sure you own a camera. I took thirty shots of Diane and Victor with my Kodak C533 pocket digital. Victor wouldn’t stay still, so most of them (including this one) were blurred out, there was also some back light from a window in a few others… I had to adjust the lighting using PhotoShop, so this shot is “lighter” by 10%.

Victor does cry. And he has attained a whole new, and infinitely annoying, crying range in the upper register lately, but he’s not miserable… I’m pretty sure babies would never cry without a serious reason… like when Victor cried after the Ottawa Senators were eliminated from the 2010 NHL playoffs, even though he knew it was inevitable. But he’s sensitive like that. 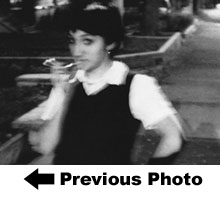 I’ve lived in more than fifty places. I've been paid to pick stones out of fields, take backstage photos of Britney Spears, and report on Internet privacy issues. My photos have been published in several newspapers, and a couple of magazines.
View all posts by Gabriel →
This entry was posted in Everyday Stuff, Family, Family Events, From My Wall, Photography, Portraits, Shambhala, Vankleek Hill Photos, Victor. Bookmark the permalink.

3 Responses to Finding Shambhala On A Mother’s Shoulder