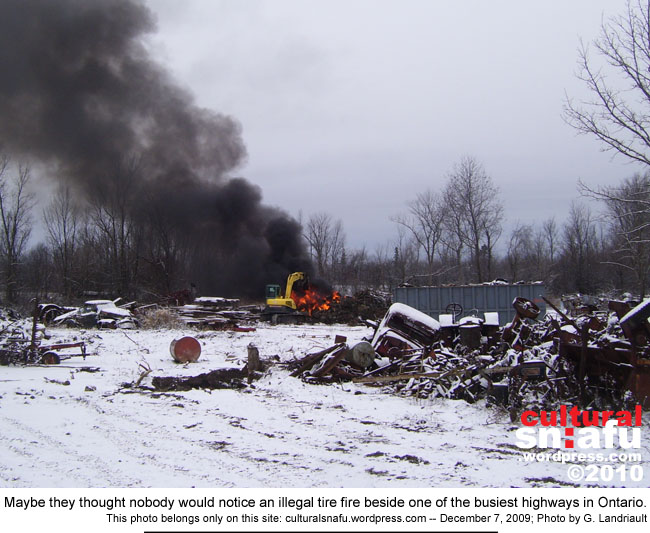 People living in rural communities such as the one I live in sometimes confuse rural with abandoned.

There are people who live in Vankleek Hill (pop. 1800) who, with their large and mostly enclosed backyard, forget what they do for fun can have an immediate impact on the rest of us. Like blaring their music during the day or night, using a nice shrub for target practice, or using a fire pit to get rid of piles of branches.

When someone is burning his yard waste the entire downtown of Vankleek Hill can become a nightmare for asthmatics and anyone with small children.

So what happens when, on a hot summer’s Saturday, you wake up coughing because your neighbour is burning yard waste? What happens when he insists on doing it every weekend, even after you’ve asked him to stop?

Apparently you can call the “by-law enforcement officer” and they’ll deal with him.

I did not know this. Or at least, when I did consider this, the office of the by-law officer always seemed just too far away, and never open on the weekends when the smoke was filling my apartment.

Recently, however, my girlfriend and I had a baby. So when I woke up last weekend to find smoke in my apartment, I made the decision to figure out the NY Times Sunday Crossword that is by-law enforcement.

And, instead of trying to ignore the problem, I made some calls and decided to chose a more confrontational method of dealing with the poor air quality, which was to take a photo of the fire as “evidence” which I could then give to a by-law officer.

In my defence I was receiving some really bad advice from someone who should have known better. It turns out, standing at a shared fence and taking photos of your neighbours’ fire pit while they feed it bundles of branches, can cause a commotion.

It can also set off a fifteen minute rant at the top of their lungs while you stand there recording everything on your pocket-sized digital camera because they’ve started making threats of calling the police and the Children’s Aid Society with insane, and totally ludicrous, accusations about your personal life.

Turns out, a resident of Vankleek Hill, or any other Ontario municipality, can make an anonymous call to the by-law enforcement officer. Or, the resident can show up during business hours and file a complaint which will be considered anonymous.

Again, you do not have to take photos as proof of the infraction.

So, here’s the phone number, URL and address of the by-law enforcement officer for Champlain Township — which includes Vankleek Hill:

And here’s a few selections from the By-Law regarding fires in Vankleek Hill — if you’re coughing, the most powerful one is L:

Exclusions: No burning permit is required for an open air fire when such burning consists of a small confined fire, which is used to cook food, for enjoyment or set in an approved outdoor fireplace and is supervised at all times.

a. No person shall set an open fire or closed fire to burn any household kitchen garbage or construction materials made of or containing rubber, plastic, paint petroleum, tar, chemical wastes, pressure treated wood, synthetic or man-made materials or any other materials considered to create excessive smoke or smell;

b. Open air burning shall allow no more than one (1) cubic meter of material to be burned at any one time;

c. Means of extinguishment (sic) of the fire designated on the permit form must be available at the site at all times during the fire;

d. Open air burning shall only occur during daylight hours, except for a campfire and/or an outdoor fireplace, unless otherwise specified and approved;

e. Open air burning shall be supervised at all times and never be left unattended until it is completely extinguished;

g. The permit holder (applicant) shall notify the occupant(s) of adjacent property(ies) of his/her intentions of setting an open fire prior to setting the same;

l) No person shall set or maintain an open-air fire or closed fire when the wind or atmospheric condition carries the smoke over other residential properties causing any impairment or discomfort to persons and animals and/or damage to neighbouring properties;

By-laws are mostly laws regulating the things which piss us off locally, and in the moment. They differ fairly broadly between communities — pesticide bans, for example, vary wildly around Ontario — but even so there are some universal truths. Like how annoying it can be to get choked out of your apartment by a guy who likes to stare at fires.

If you want to find out about the by-laws in your municipality, the ‘Access to Justice Network’ — which is partially funded by the Alberta Law Foundation, and a project supported by the University of Alberta — does a pretty good job of keeping track of municipal laws on their website.

And, one more time, no matter what your family tells you, you do not have to take photos to prove an infraction took place. At least not while the neighbour’s whole family is out doing family stuff around the fire.

I’ve lived in more than fifty places. I've been paid to pick stones out of fields, take backstage photos of Britney Spears, and report on Internet privacy issues. My photos have been published in several newspapers, and a couple of magazines.
View all posts by Gabriel →
This entry was posted in Canada, Entertainment, Punk, Vankleek Hill Area Blogs and tagged By-Law Enforcement, Champlain Township. Bookmark the permalink.