I’m not sure what Victor will be interested in when he’s a little older. My grandfather asked me this week what sports my girlfriend and I will enroll Victor in, I really didn’t have an answer, and when I said “soccer… I guess, and hockey”, it just felt silly.

But if repetition is one of the keys to education, then after this past week Victor is well on his way to growing up to be attracted to trucks driving in reverse.

The building my girlfriend and I live in is right next to the only intersection in Vankleek Hill with traffic lights. The municipality replaced the old ones a few years ago with shiny high-tech ones complete with sound beacons so people who are visually disabled can safely cross the street.

The problem is, since there was a power outage over a week ago, the sound beacon won’t stop sending out its electronic pulse. For thirty seconds of every minute, twenty-four hours a day, the frigging thing just keeps beeping.

I’m not actually sure if the noise is as frustrating for Victor as it is for his mommy and I. Loud noises intrigue him… when we’re hanging out on my balcony and the motorcycles or maxed out cars take off from the intersection, he’ll always turn his head out of curiosity towards the noise.

My girlfriend also has a tiny, but very excitable dog, and Victor has no problem when the thing is yapping away right next to his ear.

Diane called the Champlain Township office late last week about the beacon, and was told the problem had been fixed. After she told them it hadn’t been, they promised to send another crew out… but haven’t, yet. An acquaintance of mine, who lives just on the other side of the intersection, also called and was told everything was working the way it should… that the beacon was supposed to go off like it is.

So on Saturday, at about 3am, I took my camera out to record it, and this is what Victor, Andrew, Diane and I have been living with for the past week… try watching for the full three minutes (you need speakers):

Long before Victor came around, and way before Luc had Chase, we’d talk about what we wanted our kids to do as they grew up. Mostly it came down to stuff which would make our future kids better hockey players — like martial arts for the flexibility.

But now that Victor is here I have no idea. I haven’t even really been able to visualize the little guy as much more than the natural evolution of formula-guzzling human beings he’s presenting himself as now.

Victor’s food trials continued this week. Zucchini, apples with cinnamon, and mixed vegetables with pears were all on his menu this week.

Andrew, Victor’s older brother, started T-Ball last week, so this week Diane and I took Victor to see him in action. Andrew can hit the ball well, but once he’s on base he’ll play the ball as though he were on defence. He almost got a solo double-play against his own team.

Sports with 4-year olds is a lot like herding kittens.

Victor and his brother both had rashes and diarrhoea this week. But after some bed rest, vaseline and (for Andrew) chicken soup they’re both much better now. Unfortunately now Diane is starting to feel under the weather. On the plus side, I mostly feel great.

I figure this video of Victor and Cooler hanging out should make up for the hell I’m sure everyone went through listening to the beeping thing outside our windows:

At night, when I’m walking around, I can hear the beeping all over town, (I’ll update this when it is)*. 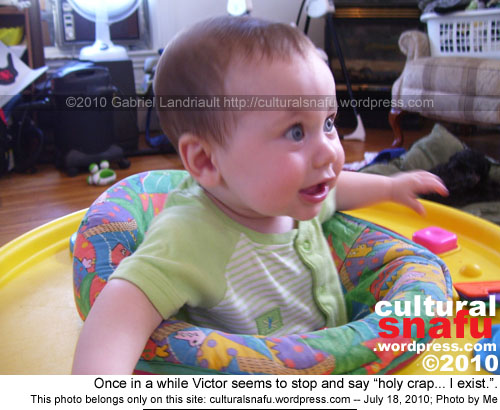 I’ve lived in more than fifty places. I've been paid to pick stones out of fields, take backstage photos of Britney Spears, and report on Internet privacy issues. My photos have been published in several newspapers, and a couple of magazines.
View all posts by Gabriel →
This entry was posted in Canada, Champlain Township, CSN:AFU Aboot Me, Entertainment, Family, Parenthood, Parenting, Vankleek Hill, Victor, Victor's Week In Review and tagged fatherhood, parenting. Bookmark the permalink.