It’s official, Victor is a cannibal. We just had to wait for his teeth to fully come through to find out for sure.

Sometimes, when we’re feeding him his hard food, we’ll just kind of drop bits into his mouth. Until recently we had an excellent shot at withdrawing our fingers fully intact. Not so much now that his two bottom-front, razor-like teeth have developed. He has at least one fully developed fang on top, but I’m not going in there anymore to find out how many there are.

A few days ago he took a chunk of Diane’s finger along with the little chunk of chicken she offered him. So, now that he has tasted human flesh it should be a lot funnier when people lean in to pinch his cheeks. Maybe not so much when he learns how to run, but for now it should be good for some laughs.

Originally my plan for Halloween was to dress him up as a zombie, but I think we’ve decided on The Joker. His hair is long enough, so we should be able to do him up like the Heath Ledger version. Diane went out and bought the makeup, so we might have a practice night before the real thing.

Victor already has the smile and weird cackling noises perfected, so now all we need is a purple suit and a green vest.

YouTube Warning: the first minute is mostly an annoying
and untrained dog barking. The rest is cute and heartwarming

This was Victor’s first Thanksgiving, and our first as a fully formed family. Diane cooked, and I mostly watched TV, so it was traditional. She did a great job, we decided to go with a regular sized chicken rather than the turkey option. Andrew, Diane’s oldest son, hasn’t really developed a regular appetite yet, so it was really just the two of us.

Victor did get some mashed carrots, potatoes and chicken chunks… I fed him with a spoon, because I saw how hard he bit down on Diane’s finger. I also saw the hole where the piece of her finger used to be.

We made sure he got some cranberries and stuffing as well. Victor has a new, interesting and very funny behaviour when he’s eating… when it’s something he really likes his eyes close really tightly, and his head rocks a little and he moans.

When it’s something he’d rather not be eating his entire face gets screwed up and squinty, his mouth opens and he shakes his head. But he keeps chewing.

Andrew was fairly content in the living room watching a cartoon called “Johnny Test”, about a boy and his dog. Mostly he was worried about having to eat more than one carrot.

It’s an interesting thing starting new traditions. Thanksgiving in my family has been pretty hit and miss in the past. In the past my parents made a big deal about it, but most of the time it’s just another day. Diane and I have already started making plans for Christmas.

We’re also starting to make plans for Victor’s first official birthday on December 12, he just turned ten-months old yesterday. Andrew will be five-years old in November, so we’re trying to figure out what that’s going to be about as well.

Last week Victor, Diane and I met up with my grandfather — coincidentally also named Victor — for lunch in Hawkesbury. We had a great time, my grandfather got a real kick hand feeding Victor some little French fry bits.

When we were leaving my grandfather leaned in to give Victor a kiss on the cheek, and Victor grabbed his nose. My grandfather stayed where he was, so Victor used both hands to grab his nose, cheeks, eyelid, forehead, ear, lips… they were really having a moment.

Little Victor was laughing and smiling the whole time, and so was Big Victor. It was a really moving moment, I know Big Victor was really touched (sure, it’s a pun, but it’s also the right word).

Victor and I have been spending a lot of time together recently. Diane’s back to work at the convenience store, and they’re put her on the morning shifts for most of the week, as well as two afternoon shifts.

So we’ve put together a decent routine. She changes Victor before leaving at 5.30am, then Victor and I wake up about 8.30am. This is when I get the music playing, I always start with Frank Sinatra’s “In the Wee Small Hours”, which seems to be Victor’s favourite album right now.

…the rest of the “lets get Victor back to sleep” playlist is a couple of albums by Canadian alt-rockers ‘Godspeed You Black Emperor!’, and the entire Muddy Waters catalogue.

Then I turn the kettle on, use the washroom, then get a clean diaper and Victor’s ‘wipes’ ready at the change station. By this time the kettle is ready, so I refill Victor’s bottle and start getting it warmed up. Then I change him, get the bottle and put him back in his crib.

He usually falls right back to sleep, which usually gives me until 10am to finish sleeping. When he wakes up this time, if he hadn’t crapped the first time he woke up, this is definitely when I need extra wipes.

For the next two hours we’re outside on the balcony, or he’s in his ExcerSaucer and I’m at the computer, or we’re on the couch watching SportsCentre. Usually all three.

If I have him in the afternoon, for Diane’s 12pm to 5pm shift, then the first two hours are his nap, then he gets some work done in his ExcerSaucer — which looks like a mini-office. If we’re bored and need something to do we’ll head down to Diane’s apartment and watch a movie.

But mostly we just hang out and talk. 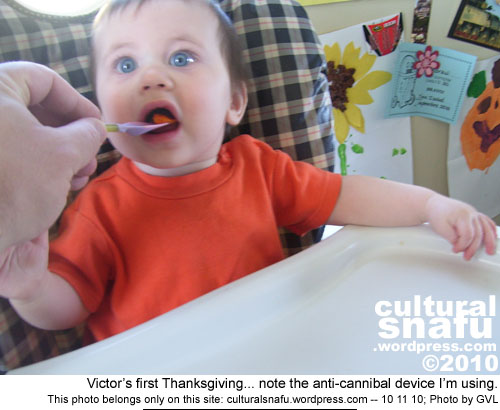 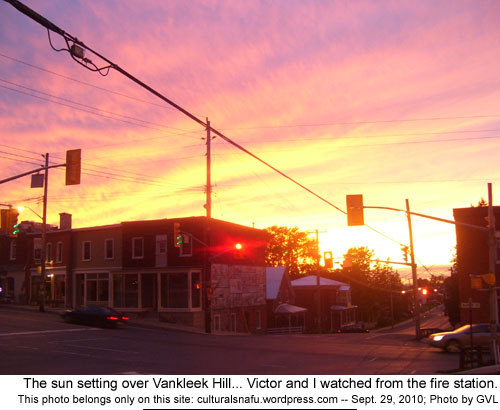