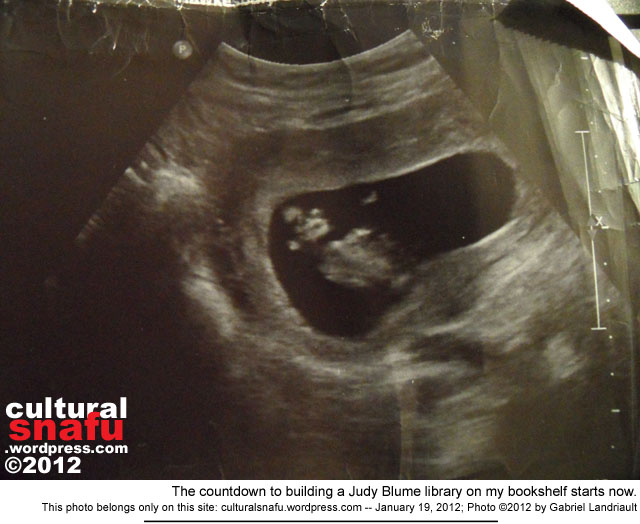 Thronged were the streets with people; and noisy groups at the house-doors
Sat in the cheerful sun, and rejoiced and gossiped together,
Every house was an inn, where all were welcomed and feasted;
For with this simple people, who lived like brothers together,
All things were held in common, and what one had was another’s.
Yet under Benedict’s roof hospitality seemed more abundant:
For Evangeline stood among the guests of her father;
Bright was her face with smiles, and words of welcome and gladness
Fell from her beautiful lips, and blessed the cup as she gave it.
‘Evangeline, A Tale of Acadie’ (1847) by Henry Wadsworth Longfellow.

We’re having a girl, and her name will be Evangeline. She will be born during the fist week of August, which makes sense because August is an awesome month.

Diane, my girlfriend, chose Evangeline, so I’m currently working on a middle name, although I do have a super-secret and totally awesome one already. Choices other than my awesome but secret one include:

My great-grandmother was named Rose, which goes back a few more generations on that side of the family. My grandfather had sisters named Bernadette and Rita (who was also an actual Catholic Sister), her middle name was Gratia, or Grace. There are also a few Léa’s in my family history, so if George Lucus hasn’t copyrighted it that could be cool.

There’s also Arvilla, Hazel, Josephine, Annabelle and Eliza. My three sisters are in the mix as well, and so is my mother. Or I could go with Cooler, which is my cats name. Evangeline Cooler Landriault… it has a ring to it.

I didn’t want to know the sex of the baby, but Diane wanted to tell me so badly she looked like she was about to burst. Just based on how she was bouncing around after getting back from the ultrasound I kind of had a pretty good idea it was a girl.

We started discussing having a second child almost immediately after our son was born, in 2009. And Diane always had a semi-secret smile when she talked about the possibility of having a girl.

She wasn’t the only one, her oldest son has been talking about having a little sister for a year now. And my mother has wanted a protege for a long, long time.

I’ve been telling Diane I was totally cool either way for our first, and for this one. But, honestly, the idea of raising a girl is freaking me out.

It’s probably not rational, but raising a girl just seems insanely complicated. And scary as hell. Not the clinical stuff, or at least not specifically the health stuff, but mostly teaching her how to be safe. Or how to be a princess.

To be honest I find most “girl” things are, mostly, ridiculous. Ponies? Gymnastics? I have to go to gymnastics meets now? Unicorns, I’ll have to learn about unicorns. And sparkles.

Teaching my (currently two-year old) son how to defend himself will be easy. People who meet him are all certain he’s going to be a large person, so teaching him to defend himself is basically going to be me showing him how to throw a punch from the shoulder. He’s already beating up his six-year old brother.

But I’m already starting to have nightmares about my daughter asking me how to defend herself against the insanely vicious self-esteem attack-games girls make on other girls. Jesus, what if she’s the first one in her class to “develop”? What if she’s last?

What if she asks me for advice on dealing with the ‘mean girls’ in her class and I screw it up? Christ, she’s probably going to want to date.

Obviously I’ll try my best to get her interested in sports, like real sports. There are soccer and rugby leagues in this region for girls, and also a mixed hockey league.

But what do I say when she asks me for advice on boys? How do I keep her safe from the ‘pornification’ of high school dating?

How long do I wait before explaining to her that people like Rush Limbaugh exist?

Thankfully there are a lot of women, alive and not so much, on my side of the family who will serve as excellent role models for my daughter. My paternal grandmother, for example, was a mathematician who worked on developing radar during WW2. My three sisters are all brilliant, strong women, who have lived interesting lives.

My mother had her poetry published when she was barely twenty. She went on to work as a book and magazine editor, and was the editor of the local paper. Her aunt became a Catholic nun when she was a teenager, and taught high school for forty years. She was also a brilliant painter and could kill a person with a stare at thirty paces.

So maybe, with living examples and stories about her ancestors, Evangeline might have a chance to survive despite my neophyte parenting skills…

There’s a young woman who works weekends at the gas station where I buy my milk and pop, she’s being raised by her single mom, she plays rugby and soccer, gets marks in the mid-90′s and is going to university next year to learn how to bio-engineer a cure for cancer.

I have to find her mother and interview her.

I’ve lived in more than fifty places. I've been paid to pick stones out of fields, take backstage photos of Britney Spears, and report on Internet privacy issues. My photos have been published in several newspapers, and a couple of magazines.
View all posts by Gabriel →
This entry was posted in Evangeline's Week In Review, Family, Humor, Humour, Parenthood, Parenting, Vankleek Hill, Writing and tagged fatherhood. Bookmark the permalink.