I think I’m about to find out how much TV is too much TV in the safe development of a child’s mind. My two-year old son can recognize Dog The Bounty Hunter’s voice, and has now started to respond to Dora The Explorer.

Dora is something new for Victor, we just started watching mostly-age-appropriate cartoons together a few months ago. But “Dog”, which comes on in the afternoons on A&E, and because there’s very little else on for his father to watch in the mid-afternoon, has been part of Victor’s life since he was just past his first birthday.

To be fair to his mom and me, Victor watches less than six hours of TV per week. I’d say it’s closer to four, and that includes DVD’s. But, for a two-year old, I do find it a little weird that he knows how to use the remote to turn on the TV, and change channels. He’ll also stop and look at the TV when he hears Dog’s voice. Which is one reason why I haven’t watched Dog in a few months.

But I’ve noticed recently, during those six or four or three hours a week, that his jaw is slack, his mouth is open and his eyes are glazed over. And that has me a little freaked out.

TV is definitely not Victor’s surrogate parent, or even his bored high school-aged constantly-texting babysitter. He spends most weekdays with me, in my apartment, and the TV is almost always off or on one of the news channels — which, for the most part, are really just poor quality versions of Dora and Dog… which are really just poor knock-offs of Bugs Bunny.

Which is what makes the glazed look all the more… disturbing.

One of the biggest changes in Victor’s life over the past couple of months is how much time he has running free. His mom moved into a new house, with wide open spaces and a long hallway, for Victor to roam around in. He finally has lots of space to ride his little vehicles and, in the spring, there’s a great backyard for him to play in.

I’ve also started to trust him to not run into the corners of my tables, or bring down my bookcases, in my apartment.

When Victor is loose, he’s a running, laughing stamina-filled, oatmeal-fueled machine. His balance and coordination have improved so much over the past couple of months. Just last November, when he was out of his ‘play area’, I felt I had to follow right behind him at all times. It was the only way I felt secure enough having him whipping around my apartment.

But now I’m confident enough in his abilities I can just set him down and get back to writing — after making sure the exacto-knives are out of his reach, of course. I also have to unplug the PS3 so he doesn’t trip over the wires… but then he tries to plug them back in.

The kid is crazy like that. He’ll take an empty pop can off my coffee table, and bring it to my recycling bin. He’ll pick up a DVD case off the TV table, walk around with it over his head, then put it back exactly where he found it… like, exactly. He’ll even nudge it a little with his finger to get it right.

He seems to know, or remember, exactly where everything goes.

If I tell him, without pointing, to put whatever he’s carrying on the table, he’ll put it on the table. When his mom says “give it to daddy”, he goes out of his way to find me and hands me whatever it is he was carrying. My favourite is “where’s your bottle?”, then he runs off and finds it. I just find that fascinating, that he understands what we’re saying, without having the words yet.

His favourite word of all time, or for the past few months, is “ball”. Or “bahll” / “bawl” / “ball-e”. It’s also his favourite thing, and his favourite shape. He has a giant yellow bouncing ball, a rubber Christmas ball that’s roughly the size of a softball, and a hacky sack.

They’re almost like a security blanket for him. He can live without them, but once he realizes he doesn’t have access to them it can be a problem.

…something Victor doesn’t really have is a security blanket. Until recently he refused to sleep under a blanket altogether. And he barely tolerates the two little teddy bears we leave in his crib / playpen — although, if I hug one of his teddy’s, he’ll hug the other and say “teddy”. As long as he has a pillow, and access to a full bottle at 2:30am, he’ll sleep right through the night.

The only reason, as far as I can tell, that he has started to use the blankets is because my slumlord landlord won’t fix the windows in my apartment so, in the winter, when there’s a wind, there’s a -10C draft from every one of them.

I leave the heat on all night when Victor is here, and the baseboard heater is just a few feet from his crib, but still… when there’s a wind, the curtains move.

Which also freaks the cat out.

He’ll take a box, like an empty diaper box, and walk around picking up his toys and random objects — empty water bottles are a favourite — and storing them in his box. Then he’ll carry his box around my apartment for a little while, then take stuff out of the box and stack the objects on my shelves or tables.

He can unscrew the canister his bum cream comes in, he can turn my printer on, he knows how to turn a juice box into a squirt gun, and he loves to dance to everything from Muddy Waters to The Weeknd.

But my my favourite thing Victor does is when he lifts his arms over his head, his hands all balled up with his thumbs sticking out, and he yells “YAY” with a big grin… except when I’m carrying him and he buries his head into my cheek. That’s definitely my favourite thing, by far. 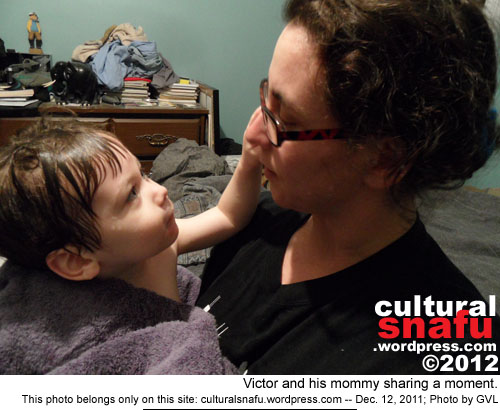 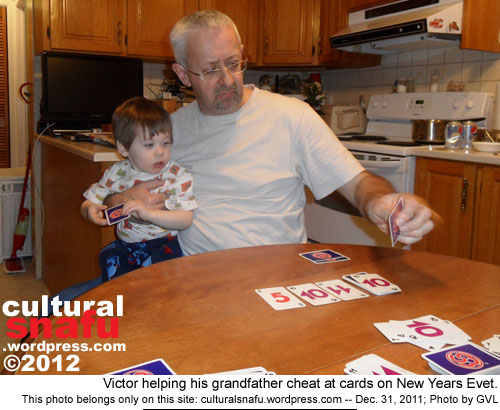 I’ve lived in more than fifty places. I've been paid to pick stones out of fields, take backstage photos of Britney Spears, and report on Internet privacy issues. My photos have been published in several newspapers, and a couple of magazines.
View all posts by Gabriel →
This entry was posted in Family, Humor, Humour, Parenthood, Parenting, poverty, Vankleek Hill, Victor's Week In Review, Writing and tagged fatherhood. Bookmark the permalink.