WHAT? I CAN’T HEAR YOU, THE SENATORS ARE STILL IN MY EARS… OR One Down Three To Go

When I’d go to concerts as a young punk I’d usually… get up front for a few songs and jam my head deep into the speakers. I’m fairly sure, at a couple of shows, the bass took over for my heart as the pump for my circulatory system. Forty minutes before tonights game — no, not the game, the shoot-around before the game — the ScotiaBank Place / Corel Centre / Palladium was packed. Twenty minutes before the shoot-around the announcer came on to tell us aboot the regulations on smoking and drinking and whatever and the crowd started screaming and we couldn’t hear him. The lights dimmed a little and music got louder and the crowd, 20,000 people, started screaming and we couldn’t hear the music. There was some feedback over the sound-system and the crowd screamed. Then the kids hanging over the glass separating them from the hallway where the Senators march out to the ice leaned down with their hands outstretched and Ray Emery appeared leading the Senators to their practice and the crowd went fucking crazy.

This was for their pre-game practice. Everyone was on their feet and clapping and cheering and whistling and screaming for ten fucking minutes straight during a practice. There was music playing, some kind of very loud metal march, but no one could hear it. I only realized it was playing because I thought I could feel a bass beat that was out of rhythm to the crowd. Then there was a lull just as the Senators were preparing to leave the ice, and we could hear the music… then the screaming and chanting started again. Go. Sens. Go. And the Senators left the ice and for the next five minutes the screaming and chanting kept going. It was like being in an engine. Or having your head buried in a speaker at a Henry Rollins concert. I had to yell into the ear of the guy beside me just to tell him that “this is a helluva thing”, and I’m pretty sure he didn’t hear me… and this was before the fucking game even started — for sweet Christ, the national anthems were still thirty minutes away.

The anthems were great. Lyndon Slewidge always does a great job… the problem with trying to get the crowd to sing the anthem in Ottawa is we get the bilingual version and the Anglos don’t know the French parts, crap we barely know the freaking English parts… once the anthems were out of the way I was really surprised at the complete lack of ceremony. When I was at the 2003 Flyers v. Senators for Game Five there was a massive, chill-inducing multimedia presentation… the Senators appeared onscreen as gladiators and there was a suitable soundtrack. Very cheesy, but when Spartacat dropped from the rafters I nearly cried. This time the multimedia presentation was limited to some powerpoint images flashed on the ice, some spotlights and two songs where the crowd was supposed to sing along but Music Dude kept fucking up the timing… I actually don’t even remember if there was a ceremonial faceoff. I do remember there was a 600 foot wide Canadian flag that almost made it around the third level. That was pretty freaking cool. Then there was a faceoff and Chris Neil beat the Anaheim Ducks 5-3… oh, and Chris Pronger nearly killed Dean McAmmond.

Chris Neil’s wife gave birth to a healthy baby girl before the game. Then daddy went out and smacked some bad men upside their heads. Chris got the second star, Anton Volchenkov got the first and some Duck… Getsajob? I don’t know, he got the third but he didn’t come out for his skate around. Unfuckingbelievable. I didn’t even realize there was food available until the third period. My hands were numb from clapping until I got home and my voice is still blown out. I stood for the whole thing… I stayed towards the back of the box so I wasn’t in anyone’s way, but I was up and hopping around for over two hours. Stephen Harper, the Prime Minister, was in da house. We were in Box 119A because Vincent Lecavalier, the goalies from the Minnesota Wild and Sidney Crosby had taken over our usual spot, 10something, I can never remember (they were there because they had won the individual awards). The people we were sharing with were great, the guy next to us was an asshole but I told him to fuck off and he did so everything was cool. I don’t know what else to write… Game Four’s on Monday… I need a haircut… I bought some new underwear yesterday… I still have to fix the photos from the game… it’s after 4am and the sun’s coming up, looks like a brand new day to me. 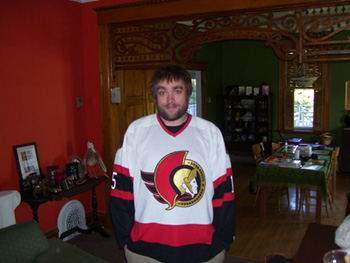 I’ve lived in more than fifty places. I've been paid to pick stones out of fields, take backstage photos of Britney Spears, and report on Internet privacy issues. My photos have been published in several newspapers, and a couple of magazines.
View all posts by Gabriel →
This entry was posted in Canada, CSN:AFU Short Cuts, Hockey, Humor, Humour, Ottawa, Photography, Pot, Punk. Bookmark the permalink.

7 Responses to WHAT? I CAN’T HEAR YOU, THE SENATORS ARE STILL IN MY EARS… OR One Down Three To Go