The Little Girl From Chernobyl 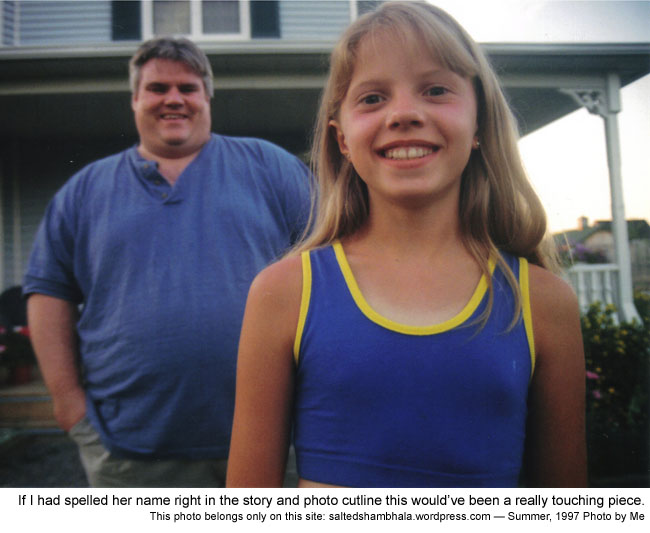 In 1986 this kid was still in the womb while her mom was living and working near the Chernobyl nuclear power plant. Three years later Canadian families were taking in hundreds of kids who had been effected by the fallout. Kind of like six week summer camps, only without the hassle of dozens of other kids hanging around. Or having a language in common.

Technical Stuff: I used to have a kick ass 28mm-80mm short lens with a macro for my Pentax, but it was second hand and started to burn out almost right away. I don’t know the technical term, but that’s why the corners are dark on this shot. My little reporter beat was technology, but I didn’t really like writing about tech… so I found new angles. Like the guy in the background was the head of marketing for a large tech firm in Ottawa. I had him put a hand on her shoulder for a couple of shots, but they looked staged.

I got marketing boy to write her name down, but when I was writing the story I couldn’t read it… so I called him, but he didn’t get back to me before the deadline. So I managed to screw up her last name. When she first started coming to Canada her skin was like paper, and her hair was like straw and she’d bruise at the slightest pressure. She also couldn’t speak English, so the interview was kind of weird. I did manage to contact someone at the University of Kiev… great story other than the whole name thing.

I’ve lived in more than fifty places. I've been paid to pick stones out of fields, take backstage photos of Britney Spears, and report on Internet privacy issues. My photos have been published in several newspapers, and a couple of magazines.
View all posts by Gabriel →
This entry was posted in Favourites, News, Photography, Pre 2004, Published. Bookmark the permalink.

5 Responses to The Little Girl From Chernobyl