Self Portraits I Can Barely Tolerate 004 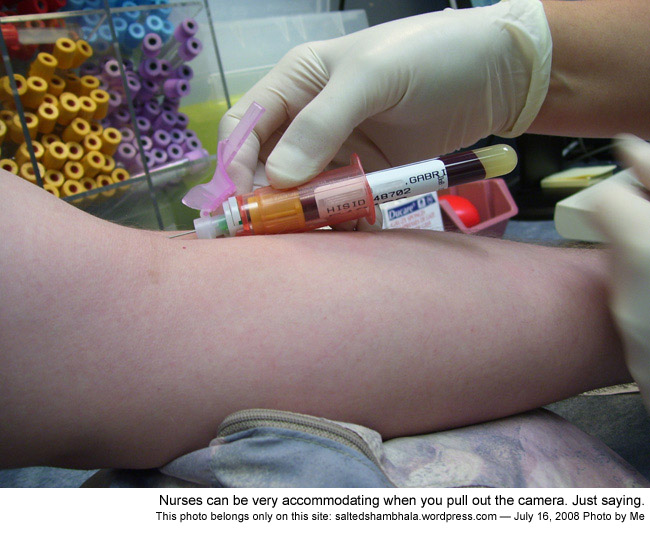 This is the third or fourth time I’ve taken shots like this in their lab. Essentially, because there’s no swivel screen option on my little pocket digital, I take them blind. Being able to guess beforehand how a subject will be framed, even though it’s two feet away and at a different angle, is something I worked on after owning this camera for a couple of months. It’s not an issue I remember coming up very often while I was using the larger SLR’s.

Technical Stuff: That’s my arm, and my blood. I edited this photo to remove some stuff on the vial. The camera was set on “center focus” and “multiple exposure”, and I took two sets of three shots. The first series had both her hands in the frame, but the shots were fuzzed. Of the second series two came out perfectly. It was her idea to spin the vial so my name would be showing.

When you want to take shots of someone doing their jobs, you can’t be afraid to ask them. Carrying a camera with you is only half the process. You have to be willing to whip the thing out and wave it around. If they’re cool then put it right into their face, let them touch it, maybe even hold it as long as they’re gentle. I’ve never had someone say no when I reach down and pull out my… ahem, camera.

I’ve lived in more than fifty places. I've been paid to pick stones out of fields, take backstage photos of Britney Spears, and report on Internet privacy issues. My photos have been published in several newspapers, and a couple of magazines.
View all posts by Gabriel →
This entry was posted in Everyday Stuff, Favourites, Occasional Events, Photography, Self Portraits, Vankleek Hill Photos. Bookmark the permalink.

4 Responses to Self Portraits I Can Barely Tolerate 004