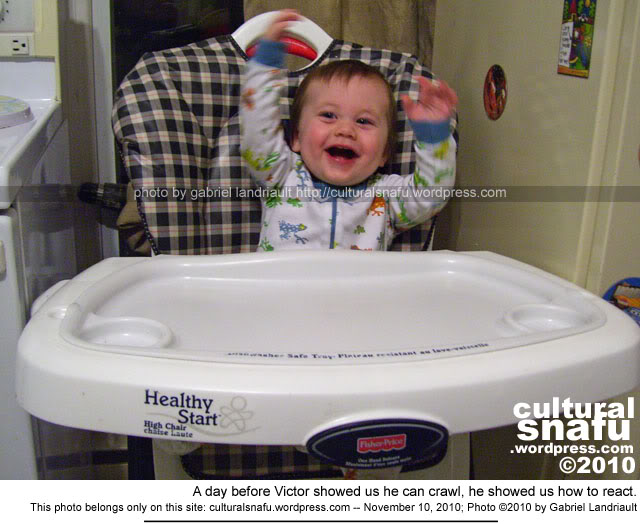 On Thursday evening, November 11, 2010, Victor decided it was time to start crawling forwards.

This, of course, means nearly everything I’ve learnt about raising a child over the past eleven months is out the window.

I tried changing his diaper this morning, thankfully it was just a big sack of pee because a naked newly-crawling baby would make a great wall-painting device… if you wanted everything brown.

Up until this morning, when I changed Victor’s diaper he’d mostly talk to me and flap his arms around. Suddenly Victor is now a 25lb angry poo-badger who hates laying around on his back.

Anytime I let go of his legs, to grab a wipe or his new diaper, he flipped over onto his stomach, got his legs locked into position, and started crawling away from me. The entire process takes him less than a second, so I know he’s been practising.

Until today I’ve done most of his changes on my bed, while he’s laying on a plastic changing blanket. But now I’ll have to find a new change station because, watching him and his bare ass rolling around on my sheets today, it’ll be years before I let him back on my bed.

Maybe I’ll just change him in the bathtub from now on, and maybe use a hose.

Everything’s different now. I guess I’ll have to get some fencing for the apartment.

Victor also turned eleven-months old today. I thought it was just a cliché, but they really do grow up fast. Only another few weeks until he’s one-year old, then a few more months until we start looking for his own apartment. 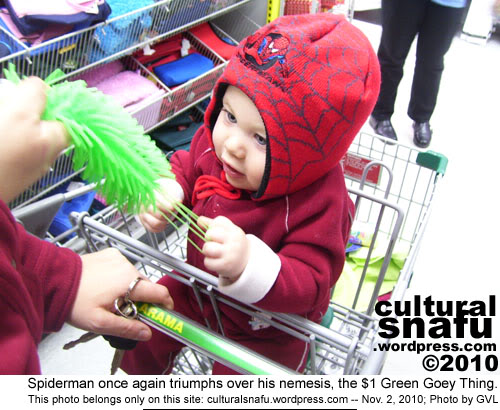 I’ve lived in more than fifty places. I've been paid to pick stones out of fields, take backstage photos of Britney Spears, and report on Internet privacy issues. My photos have been published in several newspapers, and a couple of magazines.
View all posts by Gabriel →
This entry was posted in Hawkesbury, Little Victor, Parenthood, Parenting, Photos, Vankleek Hill, Victor, Victor's Week In Review, Writing, YouTube Alert and tagged fatherhood, parenting, Photography. Bookmark the permalink.

10 Responses to Little Victor Quick Update | He can crawl