Revenge Of The Itsy Bitsy Spider 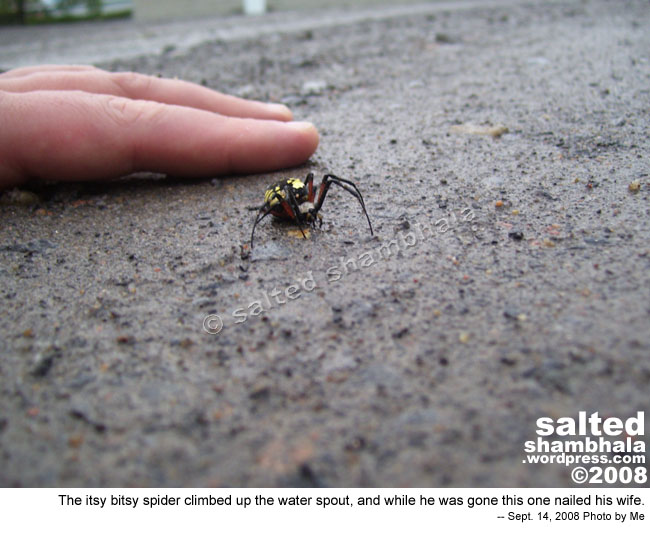 It’s supposed to look like the spider killed me. Which it probably could have done… it was so still I thought it had died in mid-stride, so I tapped on it’s yellow ass and it scurried about three inches, then stopped. I was going to do a self-portrait with my head where my hand is, but I thought I was already pushing my luck with the tapping thing. Still… it does look like the spider is the one walking away from the fight.

Technical Stuff: Whoever had the stunning idea a digital camera should be produced without a fixed focus capability was, more likely than not, Satan… or Dan Carp, who has been the CEO of Kodak since 2000. If you look closely you’ll see a little orange stone… it’s actually not hard to miss, it’s the only fucking thing in sharp focus. My fingers and the spider are almost there, but the patch of ground around the fucking stone is what the camera focused on.

I’ve ranted about this before… but on another blog… which I shut down months ago. Which means it’s totally cool to be reusing its content. Here’s the basics… the old-school viewfinder on a pocket digital camera is useless. Like tits on a bull useless. So in order to get the focus right we have to use the screen on the back. But if the subject is a spider walking across the driveway, and you want a full frontal shot, how likely is it you’ll lay down in the dirt, hold the camera an inch off the ground and contort your neck so you can see the frigging screen? Plus, the freaking thing is moving… which means if you want to hold focus you have to hold the trigger half down and, as you’re moving the camera, blindly guess if the bugger is in the focal plane?!? Tits. On. A. Bull.

I’ve lived in more than fifty places. I've been paid to pick stones out of fields, take backstage photos of Britney Spears, and report on Internet privacy issues. My photos have been published in several newspapers, and a couple of magazines.
View all posts by Gabriel →
This entry was posted in Animals, Entertainment, Experiments, Favourites, Humor, Humour, Photography, Vankleek Hill Photos. Bookmark the permalink.

3 Responses to Revenge Of The Itsy Bitsy Spider