Twisted but not shaken, Vankleek Hill feels effects of another 5.0 magnitude earthquake 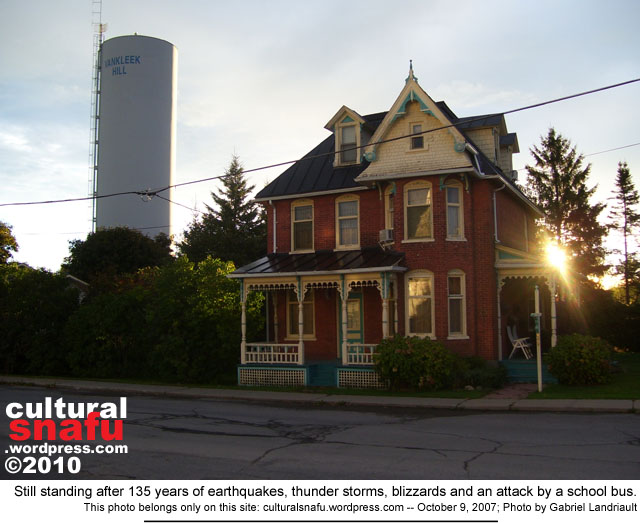 An earthquake centred near Val-des-Bois, Quebec, rolled sixty miles down the road and straight through Vankleek Hill on Wednesday afternoon, leaving buildings in our small village shaking and twisting.

The 5.0* magnitude (Richter scale) quake was felt as far south as Toronto, Windsor, Detroit and parts of Ohio, north into Montreal and west through North Bay.

At least one bridge near Val-des-Bois partially collapsed, telephone service has been disrupted in the region, there was damage to some homes in Ottawa, but Vankleek Hill seems to have escaped with no damage. Which always seems incredibly lucky.

Most of the core of Vankleek Hill is made up of 100-year old to 150-year old red brick, multi-storey homes and apartment buildings. With the village situated right in the middle of one of the most geologically active regions in Canada, it’s amazing how little damage from earthquakes there seems to have been over the 213 year history of Vankleek Hill.

Todays earthquake apparently only lasted 30 to 45-seconds — and by the time it reached Vankleek Hill its power had dissipated somewhat, but my apartment building, all two-storeys of it, felt like it was twisting for two minutes. At one point, as I stood in the middle of my living room, it was like one end of my second floor apartment was moving south while the other end was taking off somewhere north-ish.

My girlfriend heard cracks coming from the walls of her apartment while she was trying to get her 4-year old to stand under a door frame. It really felt as though, if it had gone on much longer, or with a touch more force, my home would be a convertible right now.

My parents’ home, a three storey “Victorian” (for lack of a better term) was hit by a runaway bus last year. The driver left the bus without setting the parking brake, and it rolled down a slight decline for roughly forty feet before popping the curb and hitting the house. The impact pushed a six foot wide, four feet high section of the house inwards on the foundation by 1.5 inches.

If the eight inch high curb hadn’t taken away some of the momentum the bus would likely have gone straight through the living room and dining room until it hit the back wall. Because, as strong as these old houses can seem, they’re actually incredibly fragile. The walls are not reinforced with anything, from outside to inside they’re simply brick, framing for the windows, slats and plaster, living room.

And earthquakes do rock this region regularly, so the fact the historically relevant bits of Vankleek Hill are still standing, and in one piece, just seems remarkable.

Thurso, Quebec, was the epicentre of a 4.5 magnitude earthquake just four years ago, in February, 2006 — I can remember that one rolling through Vankleek Hill as well. In 1988 there was a 5.9 magnitude quake in Saguenay, Quebec, which is kind of nearby. And of course, most recently a 3.9 centred just down the road, near Lachute, Quebec.

A ‘three’ would barely disturb a flower bed, but a ‘six’ would significantly alter the village landscape.

According to a “civil engineering expert” interviewed for the Ottawa Sun after todays earthquake, “…the quake registered 5.0 on the Richter Scale, which isn’t enough to cause structural damage to most buildings built to code.” But which code? The one from ten years ago designed for cities, or the one from 150 years ago when most of the core of my village was built?

I guess the point is we’ve lasted more than 200 years without a major calamity… then again, it has been over two hundred years.

Of course, according to Stephen Colbert, a 5.5 earthquake “just proves how bland Canada is.”

I did get an email from my youngest sister making sure I was okay, which was kind of, sort of, very touching. But don’t tell her I wrote that. And, you know how dogs and birds can detect earthquakes before they happen? Apparently cats really just don’t care.

*Update: according to Earthquakes Canada (Natural Resources Canada), by the time the earthquake got to Vankleek Hill it was a 3.8 on the Richter Scale.

I’ve lived in more than fifty places. I've been paid to pick stones out of fields, take backstage photos of Britney Spears, and report on Internet privacy issues. My photos have been published in several newspapers, and a couple of magazines.
View all posts by Gabriel →
This entry was posted in Canada, Canadian News, Champlain Township, CSN:AFU Aboot Canada, Entertainment, Hawkesbury, Vankleek Hill, Vankleek Hill History and tagged earthquake. Bookmark the permalink.