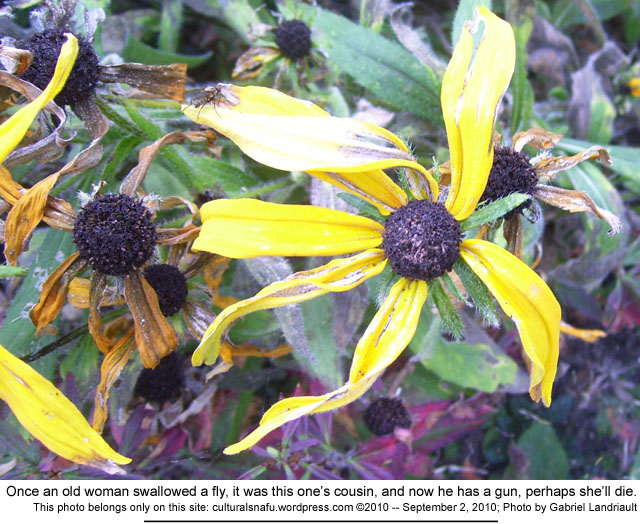 I really like this shot, but I believe the only thing in focus here is the fly. This ‘theme’ only allows for a width of 640-650px, which means I can’t enlarge the photo to prove it, so take my word… everything you see here, other than the fly, is in various stages of blurry. This is the problem when the lens of the only working camera you own is only 1/2 inch wide, and the whole camera fits perfectly into your baby’s hands.

Technical Stuff: The first thing you’ll have to do to get a shot like this is, if you have an auto-focus camera, it’d be a good idea to drop it a few times. After that, just make sure you take medications that make your hands shake, it’s also really important the lens of your pocket-sized digital camera has been taken from a child’s miniature doll set so it barely allows any light to make it back to the tiny computer inside your camera… actually, that’s pretty much the secret right there.

In high school one of my English teachers told me when an artist painted a fly on the subject of a portrait, it signified death and decay. My English teachers both smoked a lot of pot, but it stuck with me. Flowers are always more interesting in the early fall when, coincidentally, they’re in the middle of dying and decaying. This was one of eighteen shots I took of this flower. This is the best one — by that I mean the most in focus. The dead flowers behind the yellow one are really close to being in sharp focus, but only because they wanted to taunt me.

The Old Woman Who Swallowed The Fly 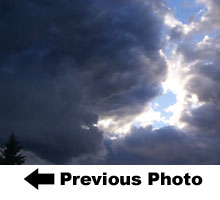 I’ve lived in more than fifty places. I've been paid to pick stones out of fields, take backstage photos of Britney Spears, and report on Internet privacy issues. My photos have been published in several newspapers, and a couple of magazines.
View all posts by Gabriel →
This entry was posted in Almost Like Art, Animals, Cool Stuff, Entertainment, Everyday Stuff, Nature, Photography, Photos, Seasonal and tagged Nursery Rhymes, Photography. Bookmark the permalink.

4 Responses to Almost Like Art | The slow death of colour