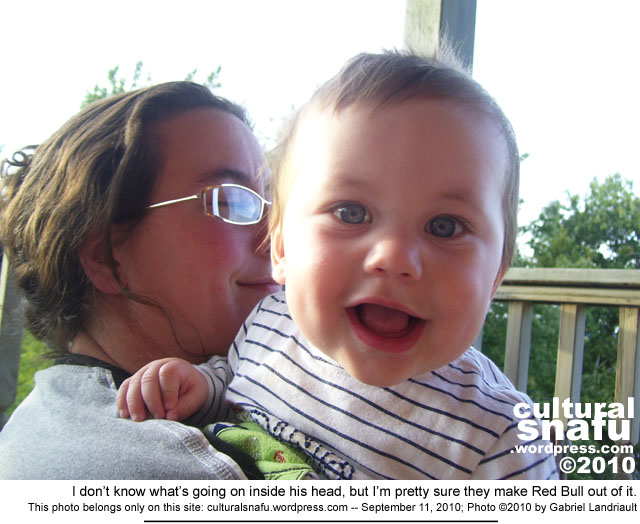 I might be jumping the gun here, I’m not sure what the protocol is, or what exactly constitutes “crawling”, but my kid — on camera — got into the crawl position, did his frog dance, then moved one knee forward and then the other.

All together he moved forward roughly four inches. Since then I’ve seen him make the movements, but he doesn’t plant the knee he’s pushing off of, so he kind of falls down, laughs, and tries it again.

Which, I’m starting to suspect, is the fun part for him. It’s fun for him to make the motions, because they’re new, the movement the motions are supposed to create is not something he’s thinking about.

So… he can crawl, he just doesn’t want to right now. He can, however, definitely bite. Any time he can grab someone’s finger, he’ll pull it right into his mouth and chomp down as hard as he can. He’s not being mean, he does the same thing with any object he can grab.

It just hurts more when it’s your finger. He doesn’t have any full teeth yet, but there are the sharp points of a couple of them sticking out of his gums. It doesn’t really hurt, but it is funny to watch him try his hardest to bite your finger off. His eyes get all squinty… he looks like a toothless old dude trying to bite off a piece of beef jerky.

Then, when he can’t get a piece off, he’ll pull your finger out, examine it, turn it a little, and jam it back into his mouth to take another shot.

Having something to push into his gums relaxes him. I have an empty pill bottle that I give him when he starts to get upset. He likes it because it fits his hand perfectly, so he can wave it around and bang it on his ExcerSaucer. But then he’ll look at it really carefully, turn it around, find the sweet spot, and jam it into his upper gums and push.

His two front, top teeth are getting ready to pop out. And it looks like Victor is going to have his daddy’s bucktooth gap. Hopefully he also got my sense of humour.

There are two things Victor loves doing more than anything else… bouncing and talking. He loves his Jolly Jumper and his ExcerSaucer because he can jump around like a maniac in them. But now he’s doing it in his high chair, while we’re feeding him.

When he’s in his high chair we like to tilt the seat back a little, it makes it easier to feed him. So a little while ago he figured out how to pull himself up straight so he could grab a bottle off the tray. Which was cool. But now, and this is a very recent phenomenon, he’ll use the tray to pull himself up, and then he’ll almost throw himself back into the seat. Because it’s a plastic high chair it sounds violent, and overall it’s only kind of “nervously funny”.

It’s probably the first thing he has learned how to do that I hope he grows out of.

I guess the biggest news from the past few weeks is Victor’s ability to talk. I think this is kind of like the crawling situation, it sounds like Victor is talking, but it’s probably just something he’s doing to pass the time between bottles.

He has been saying “dahdahdah-dahdahdah” for almost a month now, but it always seemed to be just an extension of the little noises he makes that make his mouth feel cool. Just over the past week, for example, he has started blowing raspberries at everything.

I take full credit for teaching him how to do that.

But at some point last week he started to say “dada”, like it was it’s own, independent word. It makes sense since his mom has been repeating “dada” in front of him since, at least, March.

There are times when we’re playing — I have a little video of him doing it — and he’ll go through the sounds he knows, then get quiet and start whispering “dada… daDA… DaDa… DAda”, like he’s going through the different pronunciations. It’s one of the coolest, most amazing things I’ve ever seen.

He’s actually at the point now where he’s imitating our mouth movements. Which is just funny. We caught him doing it tonight. His hands move while his mouth moves like he’s explaining something to someone. It’s like he’s lip syncing to a conversation in his head. 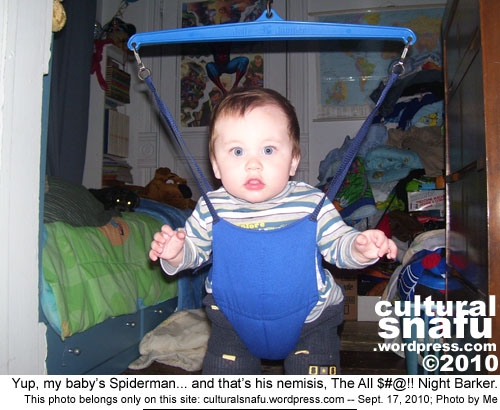 Little Victor’s great-grandfather, not-so-coincidentally also named Victor, recently had a procedure done to open up his arteries — he had a “mild” heart attack about a month ago, and put a stent in to open one of his arteries.

They were going to add two more stents this time, but decided it’d be easier and just as effective to clean the arteries out manually. My grandfather got a real kick out of watching the whole thing on the monitor.

He got a bigger kick when they told him he could get back on the golf course almost immediately. He played two rounds of 18-holes that week, his score was pretty much the same as before the heart attack.

He’s been having some problems with depression, which is normal when you’re facing heart surgery — and having negative influences in his life. But I’ll leave that for another post — even though I had already written it out and was going to publish it here.

My grandfather has been asking me questions about psychiatry since he moved into his retirement home. And for the past few months he has been asking about the medication I take so I can sleep — he’s having difficulty getting to sleep, and staying there. Personally I’ve had a sleeping disorder, as a symptom of something larger, since I was seventeen… ish.

My grandfather and I talk by phone twice a week. We also try to get together once a week for lunch, and so he can have a visit with his great-grandson.

He’s also (while we’re on the subject) depressed because he has no one left to talk with. Most of his construction friends have passed on, and there’s no one in the ‘retirement home’ he can relate to. He’s pointed out in the past that he and I are in the same position — because of a lengthy, and difficult, recovery from a major health issue, I’ve also lost most of the friends and connections I’ve ever made.

So, basically, he believes we’ve got each other and not much more.

He likes that I’ll argue with him. It keeps his mind active. The thing with my grandfather is he has slowed down — he’s 88-years old, lived through a heart attack and a few strokes — so you have to give him time to talk, otherwise he gets confused and shuts down.

Unfortunately, the “negative influence” I’m not writing about at the moment is around him almost constantly and seems to enjoy talking faster than he can compute, so he feels like he can’t defend himself.

Personally I think some kind of intervention is gravely needed, and at least a decade overdue. Or maybe just handcuffs and 2000mgs of Seroquel.

The former, which is probably a better idea to get started with, is something that’s beyond my current capabilities.

So… I have no idea what’s going to happen. Which is also depressing.

I’ve lived in more than fifty places. I've been paid to pick stones out of fields, take backstage photos of Britney Spears, and report on Internet privacy issues. My photos have been published in several newspapers, and a couple of magazines.
View all posts by Gabriel →
This entry was posted in Cool Stuff, CSN:AFU Aboot Me, Depression, Entertainment, Everyday Stuff, Family, Hawkesbury, Parenthood, Parenting, Photography, Portraits, Self Portraits, Vankleek Hill, Victor, Victor's Week In Review and tagged fatherhood, parenting. Bookmark the permalink.